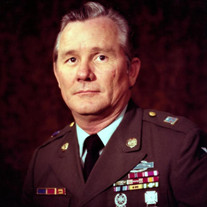 Wallace "Pete" Henderson of Umatilla, Florida passed away on Thursday, October 1, 2020, at 81 years old, from diseases related to his exposure to Agent Orange during his service in Vietnam (1969). Pete was a follower of Jesus Christ, a loving husband and father. He was born to Walter and Sadie (Fraser) Henderson on December 30, 1938, and was raised in Gainesville, FL, where his first job was selling coca-colas at the Gator games at age ten. He is survived by the love of his life, Kathryn Henderson, whom he met at Fort Hood, TX and by his children: Wallace (Esther) Henderson; Chip (Dingo) Henderson; Sandra (Andreas) Orf; Dallas (Paul) Meringolo; and Phebe (Blake) Williams and 11 grandchildren. Pete, as he was known to friends and family, joined the United States Army when he was 17 years old and retired as a Sergeant First Class with 24 years of service. He was a Vietnam Combat Veteran with the 25th Infantry Division (Wolfhounds), a medal-winning welterweight boxer for the Army and an award-winning pitcher on the All-Army Baseball Team. After his retirement, Pete graduated from the University of Florida in 1986 with a Bachelor of Science degree in Parks and Recreation. Shortly after graduation, he worked for UF/IFAS Extension 4-H Youth Development Program as a 4-H Camp Manager for Camp Timpoochee and Camp Ocala; he retired in 2002. Pete became bored in his retirement and went to work as a substitute at Umatilla High School for twelve years before permanently leaving the classroom in 2014. Pete was a devoted follower of Jesus Christ [who did not hesitate to tell you what eternity without Jesus Christ will be like, who deeply loved his wife, children, and grandchildren. His many titles and names included Pistol Pete, Red, Mr. Gator Man, and Mr. Go-Gator Man. His wit, charm, and devilish smile would win you over every time. Pete believed in giving back to the community, donating time and money to the church, and supporting youth programs such as the Umatilla High School athletics and 4-H program. He was a special man, a community leader, and enjoyed helping others see their full potential. During his time at UHS, he had an enormous impact on many UHS students. He had a larger than life way about him, and he never met a stranger. Visitation will be Friday, October 9th from 4:00 – 7:00 PM at First Baptist Church of Umatilla. A funeral ceremony will be held on Saturday, October 10th at 10:00 AM at First Baptist Church of Umatilla, followed by a grave ide military salute at Lakeside Memory Gardens. A meal will follow back at the church. RSVP if you plan on joining us for the meal on Saturday so there will be enough for everyone to eat. In lieu of flowers, please make donations to Cornerstone Hospice at www.cshospice.org

Wallace "Pete" Henderson of Umatilla, Florida passed away on Thursday, October 1, 2020, at 81 years old, from diseases related to his exposure to Agent Orange during his service in Vietnam (1969). Pete was a follower of Jesus Christ, a loving... View Obituary & Service Information

The family of Wallace "Pete" Henderson created this Life Tributes page to make it easy to share your memories.

Wallace &quot;Pete&quot; Henderson of Umatilla, Florida passed away on...

Send flowers to the Henderson family.