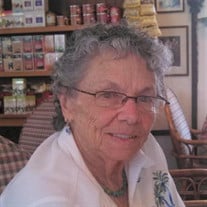 Mary Ellen Blanton, 85, a beloved mother, grandmother, great grandmother, great-great grandmother and friend went to be with her Heavenly Father on August 6, 2021. Mary was born in Albany, Indiana on June 7, 1936, to Marion Rey and Ellen Holloway. Later, she relocated to Florida in 1993 from Arizona where she and her husband Lewis Blanton, Jr., and started putting their roots down in Umatilla Florida. A very talented and gifted woman who could do anything that she set her mind to. She sewed, knitted, crocheted, and canned vegetables. She made sure that her family was well provided for as well as keeping her 8 children in line. Mary played an assortment of musical instruments too: Piano, organ, autoharp, and her steel guitar called an ado brow. Mary also a had a beautiful singing voice that she would share with her family, kids, and her beloved church: Voice of Calvery or what everyone referred to as the "little church in the woods." Mary is predeceased by her beloved husband of 35 years, Lewis Blanton, Jr., her brothers; William "Bill" Holloway and Richard Holloway. She is survived by her sons: Marion Dunsmore, Earl Eugene Dunsmore, Merle Blanton, III, Lewis C. Blanton, III, Ted William Blanton. her daughters: Melissa Schabar, Piciscilla Goodwin and Rosalie Goodwin and is blessed with 36 grandchildren, 29 great grandchildren and 2 great-great grandchildren. She will be dearly missed by all who knew her.

The family of Mary Ellen Blanton created this Life Tributes page to make it easy to share your memories.

Send flowers to the Blanton family.