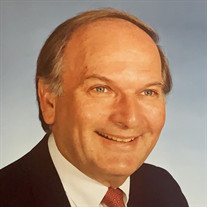 John Robert Schrieffer, 88 passed away peacefully on July 27, 2019 in Tallahassee, FL. Bob was born in 1931 outside of Chicago. He moved with his family as a young boy to a small town in Florida, Eustis. His father was a successful realtor and part owner of a citrus cooperative. Bob took to math and science from an early age. A neighbor gave him a book on math and soon realized the mental gift God gave to Bob. Bob’s biggest success was his love of family and friends. He exceeded academically in high school to the point that he was admitted to MIT. He also played football at Eustis High, breaking his collar bone because his shoulder pads were on backwards he recalled jokingly. Bob had an incredible zest for life, a sense of humor, self depreciation and dedication for treating everyone equally. He was the same with world leaders and service people. After graduating from MIT, Bob went to graduate school at the University of Illinois under Nobel Prize winner John Bardeen. On a few of Bob’s accomplishments, he won the Nobel Prize in physics, was handed the National Medal of Science by President Ronald Reagan, and won numerous other awards that he would not want to brag about. He cracked the code for super conductivity which today powers super trains, computer chips and so many other parts of our personal and business lives. Bob is not defined by his professional life and worldwide success, but by his love and personal relationship with others. The love of his life was Anne from Copenhagen, Denmark who preceded his passing. Bob leaves three children and two grandchildren who he loved. Were he with you now, he would look you in the eye, smile, and genuinely ask you how are you doing and hug you if you needed it. He was a humble man of God and is with Him now. Funeral services will be held Saturday, August 3rd, 2019 at 11:00am in the First Presbyterian Church of Eustis, 117 S Center St, Eustis, FL 32726. The family is being assisted by Hamlin & Hilbish Funeral Directors, 326 E Orange Ave, Eustis, FL 32726.

John Robert Schrieffer, 88 passed away peacefully on July 27, 2019 in Tallahassee, FL. Bob was born in 1931 outside of Chicago. He moved with his family as a young boy to a small town in Florida, Eustis. His father was a successful realtor... View Obituary & Service Information

The family of John Robert Schrieffer created this Life Tributes page to make it easy to share your memories.

Send flowers to the Schrieffer family.