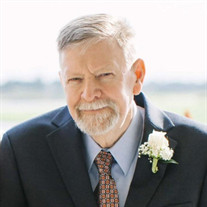 John Preston Heller passed away on January 11, 2021 in Tavares, Florida. John was born on October 22, 1951 in San Antonio, Texas. He was lovingly adopted by Rev. John R. Heller and Oveda (Voss) Heller and spent the majority of his childhood in Riviera Beach, FL and Saint Petersburg, FL. He was a devoted husband, wonderful father, and respected mentor. He enjoyed flying with his private pilots license in his youth and traveling to the mountains of NC with his wife, Deborah, of 44 years. John rose to success in the healthcare industry, working his way up from being a Registered Cardiovascular Invasive Specialist in the Cardiac Cath Lab in the 1980’s, to his most recent career as Director of Cardiac Services at Health First in Melbourne, FL. John took pride in his career and enjoyed the years of experience he had accumulated and the friendships made during that time. He retired after falling ill and spent the remainder of his time at home with his family. He enjoyed visits from his daughter, son-in-law & grandchildren and eating some of his favorite meals. His tenacious attitude in everything he did served to keep him around for a long time following his illness. He will be dearly missed by those left behind including his daughter Courtney Dehbi, son-in-law Mohcine Dehbi, grandchildren Jayden, Aveline, and baby Isa (due 2021), aunt Cathie Bachl, mother-in-law Lois Zapert, nephews Chris (Christine) Tranchina and Miles Tranchina, and the Dehbi family. He was preceded in death by his wife Deborah Heller, father Rev. John R. Heller, mother Veda Heller, and sister Susan Haffner. Our family has endless gratitude for the staff at Cornerstone Hospice and the Frank & Helen DeScipio House in Tavares, who has a special place in our hearts. Psalm 73:26

John Preston Heller passed away on January 11, 2021 in Tavares, Florida. John was born on October 22, 1951 in San Antonio, Texas. He was lovingly adopted by Rev. John R. Heller and Oveda (Voss) Heller and spent the majority of his childhood... View Obituary & Service Information

The family of John Preston Heller created this Life Tributes page to make it easy to share your memories.

Send flowers to the Heller family.