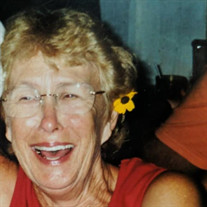 Janet Bartholomew Register, real estate broker, entrepreneur, and community supporter, died Sunday, December 13, 2020, of complications from a stroke at Regency Park Assisted Living in Eustis, Florida. She was 80 years old. She was born February 5, 1940 in Welshfiled, Ohio, but during the War the family moved to Florida where her mother worked as a welder in Panama City. When she moved to Eustis, she lived on Atwater Avenue and was lucky to be part of neighborhood adventures with Mr. Greenlee and his Model T (featured in the book, Jaime Remembers). She attended Eustis High School and was a member of the varsity cheerleading squad of 1955. She was married twice, to Joel E Register, with whom she had three children, and then to Ronald Smith, with whom she built a golf course. While she took some classes at Lake Sumter, her education focused on obtaining her licenses in real estate and as a paralegal. She was proud of her career as a real estate agent and broker, her ability to spot a good investment, and her Million Dollar Producer award. Later with her paralegal certification, she worked for the office of John Weatherford. Along the way she worked as a dental hygenist, cocktail waitress, landscaper, and co-owned and operated a laundromat. With a partner, she bought a piece of property, cleared it, and built, operated and maintained the par three golf course, Ricochet Acres. Janet loved creating things and teaching herself new skills. In addition to venturing into decopage, crocheting, sewing, knitting, acrylic painting, and teaching herself the guitar, she was an avid gardener and used to leave amaryllis bulbs by her mailbox for the neighbors to take. Among her gardening advice was the warning, "Roses don't like their feet wet." She redesigned her living spaces, oversaw the construction of a landscape design with ponds and a waterfall, and reupholstered her son Randy's 1963 Volvo. In later years, she made a quilts for all the family members. Janet enjoyed water skiing and taught all of her children to ski. She used to grouse about the time her brother Dale whipped the boat over waves on Lake Eustis to try get her to fall where the alligators were. Active in the community, Janet was a cheerleading coach, Girl Scout leader, PTA president, member of the Junior Women's League, and volunteer tennis instructor for the City of Eustis Recreation Department. On several ocassions, she mobilized residents to sign petitions to preserve their neighborhoods from unwanted construction or development. Janet was excitable and uninhibited. She loved having a housefull of people and welcomed her children's friends, people she just met, and anyone else to pop in. The louder it got, the better. One of her friends said, "She never stopped being a kid." When Janet babysat a friend's daughter, the friend returned to find both of them jumping on the couch. Janet shared her free spirit with others. While traveling with one of her friends, she went out in her pajamas and brought back ice cream sundays for dinner. People who knew her talked about how easy she was to be with and how she was always available. For several of her friends, she was the one they called during a crisis, and despite being afraid of flying, she hopped on a plane. She played bridge for over 50 years, was active in the Lake County Duplicate Bridge Club, and was proud when she and her partner finished on the 'boards' ahead of some of the 'big boys.' Never plagued by perfectionism, Janet's response to a spot or missing button was always, "You'll never see if on a galloping horse." She was prone to speaking her mind, was not shy about expressing her impatience, and never curbed her fiesty personality. Her children remember how loud and animated she could be on the phone when she was having trouble with someone on the other end. Janet could never sit still, so as she aged and was told what she should and shouldn't do, she wasn't having it. She did what she wanted anyway. She was preceded in death by her mother, Naomi Bartholomew Woody, father, Horace Scott "Slim" Bartholomew, step-father George Woody, brother, Dale Bartholomew (of Newnan, GA), and son Randel Scott Register. She is survived by her son Michael Riley Register, 53, of Umatilla, daughter Lisa Register Scribner, 57, and son-in-law Benjamin Patterson Scribner, 51, of Fairfax, VA and grandchildren Michael Tyler Register, 26, Kaitlyn Nicole Register, 23, Benjamin Colin Scribner, 14, Eloise Ethel Scribner, 11, and Quinn Michael Register, 8. Janet always wanted a party, An out of this world party will be held on Friday, April 2, 2021 from 4:00 pm. to 8:00 pm at Mike's House, 40200 Babb Rd. Umatilla, FL. For those who are unable to attend please join us via Zoom at: https://us02web.zoom.us/j/86034935273 Her ashes will be interned above her father's gravesite in Greenwood Cemetary, along with a deck of Bicycle cards. Condolences may be sent to Michael Register, 40200 Babb Rd, Umatilla, FL 32784 or Lisa Scribner, 8973 Colesbury Place, Fairfax, VA 22031 ([email protected]). Donations may be made to Cornerstone Hospice Foundation, 2445 Lane Park Road, Tavares, FL 32778 Services have been entrusted to Hamlin and Hilbish Funeral Directors, Eustis Memories and condolences may be shared with the family on the tribute wall.

The family of Janet Bartholomew Register created this Life Tributes page to make it easy to share your memories.

Send flowers to the Register family.