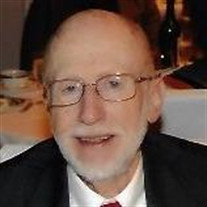 On Saturday, September 21, 2019, Howard Andrew Pospesel, loving husband, father, and grandfather, passed away suddenly at the age of 82. Howard was born on January 25, 1937 in Dayton, Ohio to Howard and Clara (Robe) Pospesel. He received his Bachelor of Arts from Wittenberg University (Ohio), his Master of Arts in Philosophy from the University of Florida, and his doctorate in Philosophy from the University of North Carolina. He taught philosophy and logic at the University of Miami for 39 years, retiring in 2004. During his academic career, he authored various logic textbooks. His highly regarded textbook, Propositional Logic, was the standard text in its field for many years and is still in use today. On August 20, 1960, Howard married Carmen Ann Miller. Together they raised three children: Michael (Jacky Anderson), Amy (Clark Ellison), and Mark (Márcia de Souza Lima). Howard was preceded in death by his father, Howard, and his mother, Clara. He is survived by his wife, Carmen, his three children, his sister, Miriam, and five grandchildren: Sara, Gabriel, Carmen, Justin, and Gregory. Howard was a long-time vegetarian because he believed that animals should not be treated cruelly. He enjoyed spending time outdoors (especially hiking and camping) and was an active member of the Florida Trail Association for many years. His summer home in Highlands, North Carolina, provided many happy memories. His children fondly remember their father’s many hobbies, including, among other things: latch hooking, painting, playing poker, brewing beer, and making pralines. Howard was known for being extremely pragmatic, and as his daughter-in-law, Márcia, said, he executed a very “Howard-like exit from this world.” He had done all the hard work of getting ready for his and Carmen’s last move to Lakeview Terrace before he passed. At Howard's request, there will be no funeral or memorial service. Two of his favorite charities were Habitat for Humanity (https://www.habitat.org/) and Feeding America (https://www.feedingamerica.org/). Anyone who wishes may make a donation in his memory to these or to any other charity of their choice.

On Saturday, September 21, 2019, Howard Andrew Pospesel, loving husband, father, and grandfather, passed away suddenly at the age of 82. Howard was born on January 25, 1937 in Dayton, Ohio to Howard and Clara (Robe) Pospesel. He received his... View Obituary & Service Information

The family of Howard Andrew Pospesel created this Life Tributes page to make it easy to share your memories.

Send flowers to the Pospesel family.