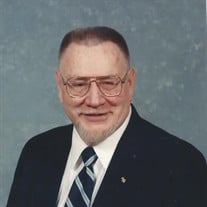 Gayken, Dale L., Senior Chief, US Navy, Retired Dale L. Gayken, 89 of Eustis, FL passed away on Monday, January 20, 2020. Dale was born on Monday, February 03, 1930 in the vicinity of Milwaukee, WI. His original parentage is unknown, but he was taken custody, and named by Richard B. Gayken and his wife Susie S. (Hill) Gayken. He was assigned to the Navy’s Pinecastle Electronic Warfare Range, up in the Ocala National Forest, in July of 1972. His early schooling and residence took him through several states. He ultimately settled and finished junior and senior high school in Waterloo, Iowa. He graduated in 1947 and being too young to join the Machinists Union, he enlisted into the United States Navy. Why did he select the Navy? “it was the first door open in the post office.” Thus, began a career that spanned 26 years, 1 month, 19 days, 7 hours and 39 minutes! A couple years later, he was hired by Florida Power Corporation as a computer draftsman. After working for FPC for 14 ½ years, he was downsized again into a permanent retirement. Dale was a life member of the Eustis Elks lodge 1578 and had served as an exalted ruler from 1978-1979. And was also a member of the Disabled American Veterans. Dale is survived by his loving wife of 33 years: Jackie Gayken, Daughter: Victoria Gayken; Son: David (Rachel) Gayken; Granddaughter: Sarah (Brad) Ward; And Great-Granddaughter: Ryleigh Ward. A memorial service will be held on Thursday, January 23, 2020 at 2:00Pm at Hamlin and Hilbish Funeral Directors, located at; 326 East Orange Ave. Eustis, FL 32726. The family invites you to join the for a gathering prior to the service from 1:00PM – 2:00PM. Memories and condolences may be shared with the family on the tribute wall. Services have been entrusted to Hamlin and Hilbish Funeral Directors.

Gayken, Dale L., Senior Chief, US Navy, Retired Dale L. Gayken, 89 of Eustis, FL passed away on Monday, January 20, 2020. Dale was born on Monday, February 03, 1930 in the vicinity of Milwaukee, WI. His original parentage is unknown, but he... View Obituary & Service Information

The family of Dale L. Gayken created this Life Tributes page to make it easy to share your memories.

Send flowers to the Gayken family.