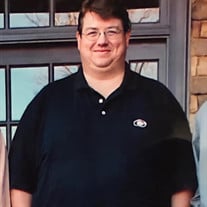 William “Bill” Donald Hayes, Jr. went to be with the Lord on Saturday, October 17, 2020. Bill was born on Tuesday, March 10, 1970 in Tifton, GA to his father, William Donald Hayes, Sr. and mother, Margaret “Peggy” Garrison Campbell. Bill was of the Baptist faith and was a lifelong member of First Baptist Church of Tifton, GA where he was baptized as a child. Bill graduated from Eustis High School in 1988. He then moved to Charleston, SC where he attended Johnson and Wales University. Bill studied culinary arts and graduated Magna Cum Laude in 1996. This was just the beginning of his culinary career. After graduation, Bill was presented with the great honor of fulfilling his internship at “The Cloister” in Sea Island, GA. After that he accepted the position of Executive Chef at Skidaway Island, another prestigious and exclusive restaurant in GA. Bill then decided to fulfill his lifelong dream of opening his own restaurant. He moved to south GA and opened “Hannah’s “named after his beloved niece Hannah Pait. He had two locations, one in Adel and one in Valdosta. Following Hannah’s, Bill opened another restaurant. “Up in Smoke BBQ” in Nashville, GA. Then he decided to venture into the catering and food truck industry and opened “Grub Works” where he specialized in delicious street food. To assist his nephew Gage to make spending money he opened Gage's Goobers, a peanut truck. At the time of Bill's passing he was in between two major projects. One was releasing his own line of his famous barbeque sauces. This project was very close to completion and was ready to be placed on the market. The second project was creating his Tailgating Cookbook for the University of Georgia. Last but most certainly not least, Bill’s favorite job of all was cooking for his family and Bushy Creek Baptist Church in Adel, for all of their special events. Bill was always in charge of catering for all the family events and holidays. When Bill was home his family had their very own Executive Chef. He was a member of various culinary arts associations. He had a love for music and sports, and he was a walking encyclopedia of both. He made many lasting relationships during his short time here on earth. Bill was a kindhearted man who was loved by everyone who knew him. He was patient, humble, easygoing, and witty. He lived his life fully and put his family and his love for God above everything else. Bill lived a life to be proud of, and was the kind of person that we all strive to be. He is survived by his loving mother: Peggy Campbell; Father: William Donald Hayes, Sr.; Step-father: Don Campbell; Sisters: Andrea (Mark) Pait, Sarah (Nathan) Classon, and Amanda (Huston) Roof; Nephews: Gage Pait, Jude Classon, and Renly Roof; Nieces: Hannah Pait, Claire Classon, Charlotte Classon, Cate Classon, and Rhys Roof; And many loved aunts, uncles, cousins, and friends. A memorial service will be held on Tuesday, October 20, 2020 at Grand Island Baptist Church, Grand Island, FL at 2:00PM. The family invites you to join them to celebrate Bill’s life. In lieu of flowers donations may be made to the Educational foundation of Lake County, to the Bill Hayes Culinary Arts Scholarship. Donations may be made on line at: www.EDFoundationLake.com, look for Bills link Services have been entrusted to Hamlin and Hilbish Funeral Directors, Eustis, FL Memories and condolences may be shared with the family on the tribute wall.

The family of William "Bill" Donald Hayes Jr. created this Life Tributes page to make it easy to share your memories.

William “Bill” Donald Hayes, Jr. went to be with the Lord on...

Send flowers to the Hayes family.