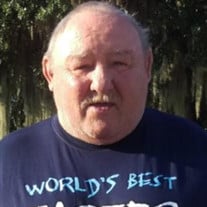 William “Bill” Bridge, 71 of Eustis, FL passed away on Saturday, June 13, 2020. Bill was born on July 29, 1948 in East Liverpool, Ohio to the late William and Olive Bridge. He moved from Salineville, Ohio where he grew up to Eustis, FL in 2008. Bill was a proud veteran of the United States Army and served our grateful nation during the Vietnam War. He also worked at Crucible Steel in Midland, PA as a millwright for over 20 years. Bill was a member of the Amvets of Mt. Dora, FL post 1992, the American Legion of Glenmoor, OH post 0736 where he was a past command member and assisted in running their annual baseball tournament, and member of the Veterans of Foreign Wars of East Liverpool, PA post 66. Bill was an avid sports fan and enjoyed watching the Cleveland Indians, Pittsburgh Steelers, and the Ohio State Buckeyes. He is predeceased by his brother Daniel E. Bridge, one other brother and three sisters. Bill is survived by his daughter: Dawn Alexander of Fredericksburg, VA; sister: Dianne (Kevin) Gray, of Eustis, FL; and three grandchildren: Ian, Morgan, and Jada. Bill was a jokester and a kindhearted man who enjoyed making people laugh and helping others. He was a loving father, brother, grandfather and friend who will be deeply missed by many. Mr. William Curtis Bridge will be inurned at Florida National Cemetery in Bushnell and his family will be having a service with military honors in his memory at a later date. Please continue to check this page for any updated service information. In lieu of flowers donations may be made to St. Jude Children’s Research Hospital by visiting: www.stjude.org or by phone at: (800)805-5856. Memories and condolences may be shared with the family on the tribute wall. Services have been entrusted to Hamlin and Hilbish Funeral directors, Eustis, FL

The family of William "Bill" Curtis Bridge created this Life Tributes page to make it easy to share your memories.

William “Bill” Bridge, 71 of Eustis, FL passed away on Saturday,...

Send flowers to the Bridge family.