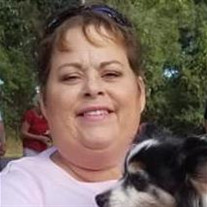 Valerie Ann Karles, 53 of Mount Dora, FL went to be with the Lord on Friday, October 18, 2019. Valerie was born on January 25, 1966 in Fort Benjamin Harrison, Indiana to Robert W. Karles and Lorraine R. O’Brien. In 2008 Valerie moved from Indianapolis, Indiana to Mount Dora, FL. She was an active member of St. Patrick Catholic Church of Mount Dora; FL. Valerie was a member of multiple organizations within the church. She was a Eucharistic Minister, Minister of the sick MTS, A member of the Bereavement Committee, Coordinator of bake sales for the Women’s Guild, St. Patrick Women’s Alliance SPA, and the Prayer Shawl Ministry. She and her therapy dog Zeke were also proud members of PAWS, The Progressive Animal Welfare Society. Valerie was a Registered Nurse and graduated from IUPUI with her BSN, Bachelor of Science in Nursing. She was predeceased by her Father: Robert W. Karles. She is survived by her Mother: Lorraine R. O’Brien; Brothers: Robert (Debbie) Karles, Scott A. Karles, and Kevin (Susan) Karles; and Twin Sister: Laura Karles. Valerie was a remarkable woman who devoted her life to helping others. She was a loving daughter, sister, and friend who will be deeply missed by many. A Wake service will be held on Thursday, October 24, 2019 from 6:00 pm to 8:00 pm at Hamlin and Hilbish Funeral Home with a Funeral Mass following on Friday, October 25, 2019 at 9:00 am at St. Patrick Catholic Church, Mount Dora, FL. Memories and condolences may be shared with the family on the tribute wall.

The family of Valerie Ann Karles created this Life Tributes page to make it easy to share your memories.

Send flowers to the Karles family.