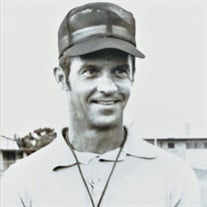 Thomas Lee Comer, Sr., 92, of Yankeetown, Florida died in Citrus County Saturday, March 19, 2022. He is survived by his wife of 51 years, Maxine Comer of Yankeetown; son Thomas L. (and Marian) Comer, Jr. of Palm Coast, Florida; Grandchildren Justin Comer and Jarrett Comer, both of Eustis, Florida; Roxanne(and Chris) Edwards of Peyton, Colorado; Brock Oliver (Stephanie) of Sarasota, Florida; Jonathan (and Erin) Oliver of Sorrento, Florida; and by 13 great-grandchildren. Mr. Comer was predeceased by his daughter, Ceresse Comer Oliver; son, Jeffery Hunt Comer; and brother, Robert L. Comer. A resident of Yankeetown, Mr. Comer was born in Memphis, Tennessee on Oct. 12, 1929 to Leon and Mildred Comer. Tom Comer was a popular Florida high school football figure whose postings bore conference and district championships and state playoff appearances as head coach for both the Eustis Panthers and neighboring rival Umatilla Bulldogs in the 1960s and 1970s. In 1972, he was tapped to coach the North Team for the Florida High School All-Star Game at Florida Field. A multi-sport, star high school athlete in Alabama, Comer attended New Mexico State University on a football scholarship. Later, he took great joy in mentoring a strong bevy of his own players toward college gridiron programs, including those at Florida, Georgia, Florida State, Marshall, Troy, Bethune Cookman, Prairie View A&M and the Air Force Academy. Comer coached Men's and Women's Swimming at various times during his Eustis and Umatilla tenures, along with Track and Golf, in addition to teaching both Physical and Driver Education - causing him gratitude for the shared opportunity of impacting the character and ambitions of a generation of high school boys and girls throughout the student body. ​In retirement Tom -- along with Max -– was a very active fishing enthusiast, both fresh and salt water, and including travel to Sanibel Island and other choice spots. He was a Past Captain of the Nature Coast Sportsman's Club. Tom and Max were also robust supporters of Yankeetown life, enjoying active roles in community and civic affairs and, especially, the immense fellowship of good neighbors and friends.Services will be conducted at Memorial Gardens Cemetery in Mobile, Alabama at a date to be determined.

The family of Thomas Lee Comer Sr. created this Life Tributes page to make it easy to share your memories.