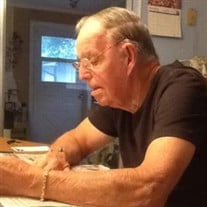 Theodore Carl “Ted” Schafer of Leesburg, Florida passed away on Tuesday, December 3, 2020 at the age of 90 years. He was born in Morristown, New Jersey. Ted proudly served his country in the US Navy during the Korean War. He moved to Clearwater, Florida from Connecticut 30 years ago and relocated to Leesburg 5 years later. He attended church at St. Thomas Episcopal Church in Eustis, Florida. Ted owned and operated Grumpy Old Men Lawn Service in the area until he retired. He and his wife, Carol, enjoyed building model boats together. Ted was an avid train collector and had a large collection of H.O model trains. He was also well known for his extravagant Christmas display that he put up every year. Every item that made up this display was hand made by Ted. From a working ferris wheel to rocket ships and more. People would travel from all over to come see his elaborate display. Teds Christmas display was recently sold to a lovely couple in Howey-in-the-Hills who will be placing a plaque up in memory of Ted along with the display this year. Ted owned a campground in Connecticut in the 1960’s. He and Carol originally met at the campground during that time. They went their separate ways and were reunited 40 years later. Ted is remembered and will be dearly missed by his wife of 4 years, Carol; son and daughter-in-law, Robert “Bobby” Schafer and his wife, Linda of Stamford, Connecticut; son and daughter-in-law, William “Billy” Schafer and his wife, Joann of Watertown, Connecticut; daughter and son-in-law, Linda and her husband Carl Archer of Troy, Maine and 4 grandchildren, Kyle, Jarred, Will and Josh. A graveside ceremony will be held in Stamford, Connecticut at Fairfield Memorial Park, where he will be laid to rest, under the direction of Bouten and Reynolds Funeral Home in Stamford. Condolences, memories, and photos may be shared on the tribute wall.

Theodore Carl &#8220;Ted&#8221; Schafer of Leesburg, Florida passed away on Tuesday, December 3, 2020 at the age of 90 years. He was born in Morristown, New Jersey. Ted proudly served his country in the US Navy during the Korean War. He moved... View Obituary & Service Information

The family of Theodore Carl "Ted" Schafer created this Life Tributes page to make it easy to share your memories.

Send flowers to the Schafer family.