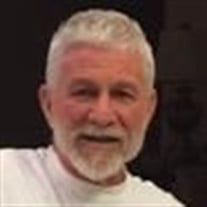 Robert W. Curry 75, of Eustis, passed away on May 12, 2019. He was born in Patterson, New Jersey. Robert went to High School in Clearwater, Florida. He earned a 4 year scholarship to Stanford University and began his studies in 1961. He graduated from Stanford University in 1965 with degrees in Statistics, Math and Anthropology. He attended the University of Minnesota for his graduate work and was just weeks away from his orals for his PhD when the "Army decided he would make a better soldier". He joined the Army in 1966 and served in Korea and South Vietnam. He was discharged in 1969. He lived in Thailand after being released from the military. He was fluent in the Thai, Laotian, Korean, French and Spanish languages. While living in Bangkok, he taught graduate level computer science courses in the Thai Language. Robert worked for Stanford Research Institute while living in Thailand. He returned to the States and continued working for SRI in Huntsville, Alabama. In 1972 he took a position with Science Applications Inc. Corporation (employee 400) and lived in Fairfax, Virginia. He moved to a position in the Federal Government in 1978 and retired from the Federal Government in 1995. Robert and Dorothy decided in 1998 that they did not want to go through another winter in Fairfax, Virginia. They started looking for a place to build a home and decided on Lake County, Florida. They lived together in Lake County from 1999 to 2019. Robert is survived by his wife Dorothy, they were married for 30 years, also surviving are his son Kennard Curry of Deerfield Beach, Florida, his stepdaughters, Deborah Spade (Steve) and Kimberly Crum and grandson Garrett Spade all of Windermere, Florida and his sister, Anne VanRyzin of Warrenton, Virginia. Robert was predeceased by his son Rudyard Curry in 2017. The final resting place will be the Florida National Cemetery, Bushnell, Florida. Memorials may be directed to Friends of the East Lake County Library, 31340 County Road 437, Sorrento, Florida 32776 and to Central Florida Chapter of the American Harp Society, c/o Jan Jennings, P.O Box 680451, Orlando, FL 32868

Robert W. Curry 75, of Eustis, passed away on May 12, 2019. He was born in Patterson, New Jersey. Robert went to High School in Clearwater, Florida. He earned a 4 year scholarship to Stanford University and began his studies in 1961. He... View Obituary & Service Information

The family of Robert W. Curry created this Life Tributes page to make it easy to share your memories.

Send flowers to the Curry family.