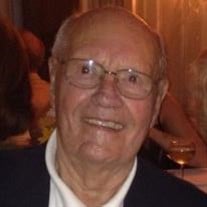 Robert Appe (Bob), 98, of Mount Dora, FL and formerly of Loudonville, NY, passed away on January 30. Bob was born in Brooklyn, NY to Charles and Martha (Hartman) Appe on July 7, 1923, Charles, a decorated marine in World War I, died in 1924. Bob became the stepson of Arthur Pfleging who Martha remarried. Bob was a 1949 graduate of Syracuse University following three years in the Naval Air Corps in World War II where he served as a night fighter pilot with Squadron VFN53 in the Pacific. He subsequently served as a pilot in the Navy Reserve, flying weekends for many years. He spent his career trading feed and grain, ultimately purchasing the trading firm Ackerman, Beardsley and Bennett in 1977, where Bob served as President until his retirement in 1987. A dedicated Kiwanian, he was elected president of the Albany, NY Club in 1987. Bob was married in 1949 to Margret June Wallace in Binghamton, NY. They settled in Binghamton where they began to raise their five children. In 1963, a career move brought the family to Loudonville, NY where they resided until 1991. Bob and Margret enjoyed an active social life with their many friends in the Loudonville area, many of whom they remained in contact with into their 90’s. The family enjoyed skiing together in the winter and boating on Lake George in the summer where they owned a home on the lake for many years. Following his retirement in 1987, Bob and Margret travelled extensively before settling in Sarasota and then Mount Dora, Florida. Bob was a dutiful and loving husband to Margret during their 72 year marriage. Margret made the to-do lists and Bob, a hard working and multi-skilled task master, executed them with aplomb. Bob was a significant presence in the upbringing of his five children his entire life teaching them the value of hard work. There were no handouts, but always help whether it was driving them around on their paper routes on a rainy or snowy morning or helping build a soapbox derby car in his well stocked workshop. He was a disciplined man exercising daily into his 90’s. In his latter years, he loved his dogs who he tired out on his daily walks. A good day started with coffee, had several of Margret’s tasks to attend to, had some down time to do a crossword puzzle and ended with a cocktail. He basked in the success of his children and was satisfied with his life’s path and rightly so. Bob is survived by his wife Margret of Mount Dora, FL, his sister Carol (Pfleging) Lustyik of Middletown, NY, his son Michael Appe (Irene) of Rye, NH, his son Donald Appe (Cheryl) of Park City, UT, his son Stephen Appe (Karen) of Harwich Port, MA and his daughter Ellen Fay (Joe, deceased) of Loudonville, NY. He is predeceased by his son David Appe (Deborah). Bob is also survived by 10 grandchildren Susan Appe, Janet Appe (Beth Malone), Bridget Olsen (Erik), Kendra Appe (Ben Heiselt), Brendan Appe, Bryn Ryker (Tom), Britton Fay (Jamie), David Fay, Brooke Fleming (Peter) and Marlowe Crown (Harrison). He is also survived by 8 great grandchildren. Throughout his life Bob maintained that his greatest accomplishment was having been the patriarch of a wonderful family. A celebration of Bob’s life will be held in the spring. Condolences, memories and photos may be shared on the tribute wall.

Robert Appe (Bob), 98, of Mount Dora, FL and formerly of Loudonville, NY, passed away on January 30. Bob was born in Brooklyn, NY to Charles and Martha (Hartman) Appe on July 7, 1923, Charles, a decorated marine in World War I, died in 1924.... View Obituary & Service Information

The family of Robert Appe created this Life Tributes page to make it easy to share your memories.

Send flowers to the Appe family.