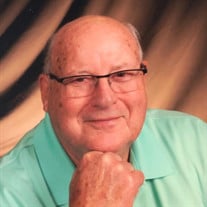 We sadly announce the passing of, Robert G. Alldaffer, 87 of Grand Island, Florida. He was called home by the Lord on 7/23/2021. He was preceded in death by his Mother, Virginia (Congleton), his father Frank, his wife Carol Ann (Everett) and great-grandson Logan Bailey. He is survived by his wife Jacquelyn (Friday), his son Michael (Cynthia), his daughter Cheryl (Donald) Dorian, his daughter Sarah (Matt) Soltis, three sisters; Betty Pryer, Doris Barrett and Gail Langner and extended family; Pat Friday, Amy (Chris), Veronica, Charlie Bingle and Mackenzie Schulte, 8 grandchildren, 9 great- grandchildren, many nieces and nephews. A memorial service for Bob will be announced soon. Bob graduated from Jackson High School in Jackson, MI and entered the Marine Corp after school, achieving the rank of Staff Sergeant. He served on a submarine detail with a reconnaissance unit off the East coast of Japan. Before retiring, Bob worked at Way Baking Co., Kelsey-Hayes Corp, and had his own cleaning business. He loved to hunt, fish, and camp. He was a master of all trades, including plumbing, electrical, and home repairs. He installed his own in-ground swimming pool at his previous home in Vandercook Lake, Michigan and built a "trike" motorcycle from and old VW engine. He had a beautiful green thumb. He was a member of the Jackson Garden Club and his yards and flowers were always gorgeous. He was also a member of the Masons, the Polish Falcon Nest 336, PLAV of Jackson, MI, and AmVets in Mt. Dora, FL. For many years he fried Paczki at St. Joseph Parish in Jackson where he made many friends. Bob was beloved by everyone and made such an impact on one young neighbor that the boy asked his kindergarten teacher if he himself could be called Bob Alldaffer in class. Bob's affable personality and positive attitude endured throughout his life and made a positive impact on those who were lucky enough to spend time with him. He has touched so many lives and will be missed dearly.

We sadly announce the passing of, Robert G. Alldaffer, 87 of Grand Island, Florida. He was called home by the Lord on 7/23/2021. He was preceded in death by his Mother, Virginia (Congleton), his father Frank, his wife Carol Ann (Everett)... View Obituary & Service Information

The family of Robert G. Alldaffer created this Life Tributes page to make it easy to share your memories.

We sadly announce the passing of, Robert G. Alldaffer, 87 of...

Send flowers to the Alldaffer family.