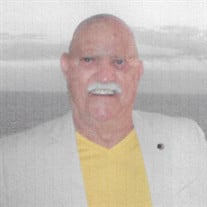 Richard C. Scott, 86, of Eustis, FL, formerly of Miami, passed away on Thursday, December 23, 2021. He was born in Petersburg, VA on Friday, September 6, 1935. He moved to Miami as a child in 1949. Before moving to Eustis in 1994, Richard worked as a transit supervisor for Dade County Transportation until he retired. He is survived by his wife of 46 years, Dorothy L. Scott of Eustis; son, R. Clint Scott of Odessa, FL; daughter, Vicki Brooks of Covington, GA; 4 grandchildren, Courtney Marangogs of Bedford, NH, Shaye H. Scott of Odessa, FL John Peavy and Terry Peavy of Covington, GA; several great grandchildren; and brother-in-law, James J. Lahey of Eustis. A memorial ceremony will be held on Monday, January 3 at 1:00 PM in the funeral home chapel. Family and friends may gather from 12:00 – 1:00 PM. To view the service, click the link below at the time of service. http://webcast.funeralvue.com/events/viewer/66153/hash:2800E81919D48006 Condolences,, memories and photos may be shared on the tribute wall.

The family of Richard Clinton Scott created this Life Tributes page to make it easy to share your memories.