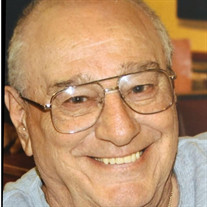 Picolo, Richard, 83, of Belleview, FL passed away peacefully on August 12th, 2021. His last days on this earth were spent with family around him telling stories of a great man and a life well lived. Richard was born in Springfield, Ohio on December 11th, 1937. Richard was the Son of James and Mary (Butera) Picolo. Richard spent his professional life as an employee of International Harvester (Navistar) in Springfield, OH until he retired in 1992. Richard also served his country in the Army National Guard. Personally, Richard proudly carried the title of Stepfather/ Papaw for almost 50 years and if someone was going to write a book on how to be a great and loving Stepfather/ Papaw, that book should be about Richard Picolo. The term Stepfather does not do justice to the role he filled in the lives of his stepchildren and grandchildren. He loved and raised them as his own and we are all better people because of Richard. Richard is survived by Sons Kevin Bennett of Orlando, FL and Jeff (Lisa) Bennett of Belleview, FL and Daughter Sandy Stevens of Springfield, OH. Sister, Rita Fitzwater of Springfield, OH. He was Papaw to Chase Bennett and Eden Bennett of Orlando, FL, Jackson Bennett and Sawyer Bennett of Belleview, FL, Emily (Brian) Bennington, Kyle Bevan and Daniel Bevan, all of Springfield, OH. Great Grandchildren Hailey Baker, Carson Bennington and Kennedy Rae Bennington. Richard had many loving family members, including many loving nieces and nephews who all loved their Uncle Rich and many close friends. Richard is preceded in death by both of his parents and by his Wife of 46 years, Martha Picolo, and one Grandchild, Kelly Michelle Bevan. Richard was also preceded in death by Brothers Joseph Picolo and James Picolo and Sisters Margaret Parson, Virginia Mencke, Elizabeth Garrity and Bernice Boggs. Richard had a special place in his heart for his loving dog, Precious. Richard was an avid sports fan and was an accomplished bowler. Richards bowling life included multiple 300 games. He was a loyal Ohio State Buckeye fan who always carried a Buckeye in his pocket to show people and often would give the Buckeye to them. He loved playing poker with his family. He enjoyed fishing and loved watching wrestling on TV. Spending time with his family was, by far, his greatest joy. Richards family will plan a small private ceremony in the future to celebrate the life of Richard and Martha. No public services will be held. Condolences, memories and photos may be shared on the tribute wall.

Picolo, Richard, 83, of Belleview, FL passed away peacefully on August 12th, 2021. His last days on this earth were spent with family around him telling stories of a great man and a life well lived. Richard was born in Springfield, Ohio on December... View Obituary & Service Information

The family of Richard Picolo created this Life Tributes page to make it easy to share your memories.

Send flowers to the Picolo family.