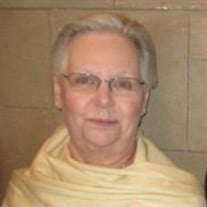 ﻿Priscilla Kyner Beatty passed away peacefully in her sleep at home in Mt. Dora, Florida on September 14, 2020. She will be remembered fondly by her family, many friends and business associates. She leaves behind one son, Christopher Beatty, of Peoria, Illinois and is pre-deceased by her son Kirk Kyner Secrest. Priscilla was born in Waterloo, Iowa to L.M. “Doc” Kyner and the former Kathryn Barton in July 1943. She was the first of three siblings, and is survived by Dr. David B. Kyner of Fort Lauderdale and L.G. Kyner II of South Holland, Illinois. After graduating from West Waterloo High School, Priscilla pursued a B.A. from the University of Denver. Moving from Colorado to Chicago, Priscilla took a bold step into the male world of the futures business where women were not readily accepted on the trading floor. She began her introduction to trading on the exchanges with Maurie Schneider and Company and then proceeded to conquer the commodities business. In 1977, upon the death of her father, Priscilla sold her Gold Coast condo, packed her Datsun pick-up truck and drove to Humeston, Iowa to assume management of the family farms. While attending a farm auction, she encountered an old flame; Priscilla and James Beatty were married in 1978. Priscilla started a family with Jim in Iowa and continued her education at Simpson College graduating Magna Cum Laude. One of Priscilla’s dreams was to have a Christmas shop, so as she was nearing retirement, Priscilla and Jim began their transition to Mount Dora, Florida by using their knowledge and experience of commerce to open Bruce Cottage with Dr. David Kyner and Steve Lowensten. After retirement from Bruce Cottage, she continued pursuing her life long endeavors: helping others, VISTA, teaching, the United Methodist Church, and the UMWG. She was a true steward of the Christian philosophy of helping others until the very end. Priscilla was an original member of the Mount Dora Merchant’s Association. She was also an original volunteer who helped to start the Lake Cares Food Pantry in 2009. She served as a board member and treasurer for eleven years and was the pantry manager from 2009 to 2015. Priscilla was a keen supermarket shopper and clipped countless coupons for the best deals to fill the pantry cupboards with needed supplies. She was adored by her five grandchildren and four great grandchildren. She is very much missed by her niece, Brenna Kyner, and nephew, Major David Kyner. In lieu of flowers, contributions made in Priscilla’s honor to the Lake Cares Food Pantry are greatly appreciated. Please visit www.lakecares.org or call (352) 383-0100. Services have been entrusted to Hamlin and Hilbish Funeral Directors. Memories and condolences may be shared with the family on the tribute wall

&#65279;Priscilla Kyner Beatty passed away peacefully in her sleep at home in Mt. Dora, Florida on September 14, 2020. She will be remembered fondly by her family, many friends and business associates. She leaves behind one son, Christopher... View Obituary & Service Information

The family of Priscilla Kyner Beatty created this Life Tributes page to make it easy to share your memories.

﻿Priscilla Kyner Beatty passed away peacefully in her sleep at...

Send flowers to the Beatty family.