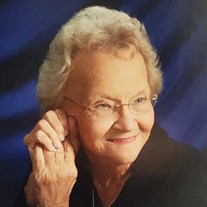 Patricia Louise Hampton, 86 of Daytona Beach, FL passed away on Sunday, February 23, 2020. Patricia was born on Sunday, February 11, 1934 in Daytona Beach, FL to the late Alan and Ruth Brownrigg. She was an active member of Liberty Baptist Church of Leesburg, FL. Patricia was an Elvis Pressley fan and enjoyed reading,fishing, NASCAR, traveling, going camping and on cruses and was a fan of F.S.U and U.C.F college football where she attended school. She also loved her cat: Kit and Dog: Juliann. In her younger years Patricia was on an all women's softball and tennis team and also played on a women's bowling league.She was the founder of the first mobile dog grooming unit in Lake County, FL called “Love and Care”. After over 20 years as a school bus driver Patricia retired from the Lake County school district. She was an elected counsel women for Astatula and worked with her cousin Bobbi as a guardian for local families in the area. She is predeceased by her son: Michael Hampton. She is survived by her daughter: Debra (David) Hampton Szlasa, of Tavares, FL; cousin: Barbara "Bobbi" Young, of Daytona Beach, FL; Grandchildren: Stephen Beaudet, Sean (Jen) Beaudet, Donovan Vizenor, Amanda Hampton, and Ryan Hampton; and Great-Grandchildren: Connor Beaudet and Starla Mastronardi. She was a loving mother, grandmother, cousin, and friend who will be deeply missed by many. Due to recent events the Celebration of life service will be held at a later date at Central Baptist Church, located at; 104 Perkins St. Leesburg, FL 34748. The date and time of the service will be updated once it is available. Memories and condolences may be shared with the family on the tribute wall. Services have been entrusted to Hamlin and Hilbish Funeral Directors.

The family of Patricia Louise Hampton created this Life Tributes page to make it easy to share your memories.

Send flowers to the Hampton family.