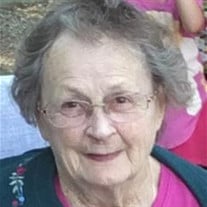 On Sunday December 8, 2019, Muriel Ann Puppo (Horgan) 83, beloved wife of 59 years to John (Jack) Puppo Jr. of Mount Dora, Florida and long time resident of North Billerica, Massachusetts went away peacefully to be with her Lord. Muriel was born in Boston Massachusetts on August 31, 1936 to William and Loretta Horgan (Shine). She was raised in South Boston with her three lovely sisters Evelyn, Eleanor and Phyllis. In 1957, Muriel joined the Army and served with the Medical Detachment, Ireland Army Hospital, Fort Knox, Kentucky until her tour ended and was award her Honorable Discharge. She returned to South Boston and it was here in 1959 she meet the love of her life Jack, at the Sheraton Rooftop Ballroom in Boston. Their romance and then marriage in September 1960 span over 60 years. During these years she became a mother in four consecutive years to; Renee, John, Lisa and Robin. They all resided in Somerville Massachusetts until 1968, when she and Jack purchased their first home in North Billerica, Massachusetts. During this time of raising four children, she and Jack opened their house to two foster children; Vinnie and then Norman. Beside being a mother, she also had two long term jobs. First during the 70's with the Billerica School system. Then seeking to do more, she used her veteran's benefits to further her education. This led her to employment in the accountant department at the Lahey Hospital in Burlington Massachusetts until her retirement in the early 2000s. In 2004 she and Jack purchased their winter home in Mount Dora, Florida and become the tradition northern snowbirds for the next fifteen years. They finally became full-time Florida residents this year. She is survived by her loving husband of 59 years: John "Jack" Puppo; daughters: Renee and Rich Dann of Pepperell, MA; Lisa McKay of Mount Dora, FL and former-spouse Bob Mckay; Robin and Dave Carignan of Londonderry, NH; son: John and Brigida Puppo 3rd of Melbourne, FL; grandchildren: Jennifer and Tom Ethridge; Jessica Nordstrom; Savanna McKay; Shayna McKay; Ryan Carignan; Rebecca Carignan, Anne Michelle DeGuzman; Brittany and Ryan Bellinger; and Tiffany Puppo; great-grandchildren: Cylenna, Paradise, Samantha, Kendra, Aubrey, Olivia and Mya; her sisters: Evelyn Dunne; and Phyllis Hartford; her in-laws: Tom and Helen Puppo, Frank and Dora Puppo, Janet and Jimmy Bennetti, Joyce Barresi, Steve and Ruthanne Puppo, Nancy Mulligan; Elaine and Lenny Armstrong and the many cousins, nieces, nephews, and all of her other relatives and friends. She is predeceased by: her father; William Horgan, mother; Loretta Horgan, stepmother; Catherine E. Horgan, her sister: Eleanor Welby and brother-in-laws; Marty Dunne, John Welby, Johnny Hartford and Tony Barresi. Muriel was a devoted wife, loving mother, grandmother, cousin, aunt and dear friend who will be deeply missed by many. A Celebration of Life for her will be held in Massachusetts late spring, early summer of 2020. Memories and condolences may be shared with the family on the tribute wall. Services have been entrusted to Hamlin and Hilbish Funeral Directors, located at : 326 East Orange Ave. Eustis, FL 32726

The family of Muriel Ann Puppo created this Life Tributes page to make it easy to share your memories.

Send flowers to the Puppo family.