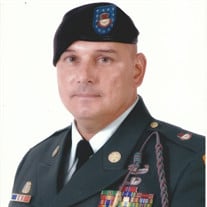 Sergeant First Class Michael C. Aten U.S. Army Retired, of Tavares, Florida passed away on Friday, January 3, 2020 at the age of 54 years. Michael was born in Eustis. He graduated from Mount Dora High School and joined the Army, serving his country for 26 years before retiring in July of 2012. He served more than two years in very dangerous areas in Iraq and was highly decorated. He was passionately known as “Soldier Mike” to many of his friends. Michael met the love of his life, Diana. They were married on September 18, 2004. He loved to ride his motorcycle and was a member of the Combat Veteran’s Motorcycle Association, Chapter 20 – 4 of Central Florida, as well as the American Legion, Post 35 of Mount Dora. He was a loving husband, wonderful father and grandfather, a beloved son and brother, and a dear friend to so many. Michael is remembered and will be dearly missed by his wife, Diana; his mother and stepfather, Velma Dawson and Scott, Sr. of Tavares; father, David C. Aten of Wildwood; son, Kyle Aten of Enterprise, Alabama; daughter, Emily Aten of Enterprise; stepsons, Kenneth Warchol of Tavares, John Elliott Warchol of Warner Robins Air Force Base, Georgia and Kevin Nawrocki of Enterprise; brothers, Dr. Butch Aten (Corrin Collier) of Ocala, Florida and Scott Dawson, Jr. (Tina) of Tavares; five grandchildren, Nicole, Ryan, Christopher, Harper and Caroline; nephews, Trevor and Connor and his niece, Alexis. Family and friends are invited to gather on Saturday, January 11 from 10:00 – 11:00 AM. A funeral ceremony will start at 11:00 AM, all at First Baptist Church of Umatilla. Military Honors will follow outside of the church. In lieu of flowers, donations may be made in his honor to the Combat Veteran’s Motorcycle Association, CVMA 20-4, PO Box 376, Mount Dora, FL 32757 or the American Legion, Post 35, 920 S. Highland St., Mount Dora, FL 32757 Condolences, memories and photos may be shared on the tribute wall. If you are unable to attend, the service will be live streamed through the First Baptist Church of Umatilla website. www.fbcu.church Click "Media" in the top menu and then "Live Stream" The live stream will start about 15 minutes prior to the service time (11:00 AM).

The family of Michael C. Aten created this Life Tributes page to make it easy to share your memories.

Send flowers to the Aten family.