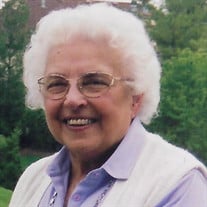 Louise M. (Sherman) Chester of Tavares, Florida passed away on Thursday, March 4, 2021 at the age of 99 years. She was born in Grand Rapids, Michigan and graduated Catholic Central High School in 1939. Louise served as a Nurse’s Aide during World War II at St. Mary’s Hospital. She then went to work at Bissell Inc. and retired after 32 years of service as an Executive Secretary. In 1970, she moved Maple City, Michigan where she reside until 1997, returning to Grand Rapids. Louise was an organist and choir director at St. Joseph Catholic Church in Grand Rapids and St. Rita Catholic Church in Maple City. She always had a love of music and enjoyed singing with her sister at various functions. Louise was an R.S.V.P. volunteer at Maple Valley Nursing Home in Maple City for over 15 years, serving as the pianist for the weekly sing-a-longs. She was also an avid letter writer, sending cards to friends near and far. Louise recently relocated to Florida to be closer to her daughter's. She was preceded in death by her parents, Goldie and Joseph Sherman, brothers, Paul J. Sherman and Leon D. Sherman, and sister, Elizabeth J. Russo. Louise is remembered and will be dearly missed by her two daughters, Christine (John) Fernsler of Oldsmar, Florida and Elaine (John) Novak of Mount Dora, Florida; grandchildren, Euan (Karen) Fernsler, Scott (Christi) Fernsler, Jean (Joseph) Berte and David (Lisa) Novak; as well as several nieces and nephews. A Mass of Christian Burial will be held at St. Mary Magdalen Catholic Church and she will be inurned at Woodlawn Cemetery in Michigan in the future. In lieu of flowers, donations may be made in her honor to the Multiple Sclerosis Society of Michigan, 29777 Telegraph Road (Onyx Office Building), Suite 1651, Southfield, MI 48034, Toll Free: 1-800-344-4867 or online at https://www.nationalmssociety.org/Chapters/MIG/Donate Condolences, memories and photos may be shared on the tribute wall.

Louise M. (Sherman) Chester of Tavares, Florida passed away on Thursday, March 4, 2021 at the age of 99 years. She was born in Grand Rapids, Michigan and graduated Catholic Central High School in 1939. Louise served as a Nurse&#8217;s Aide... View Obituary & Service Information

The family of Louise M. Chester created this Life Tributes page to make it easy to share your memories.

Louise M. (Sherman) Chester of Tavares, Florida passed away on...