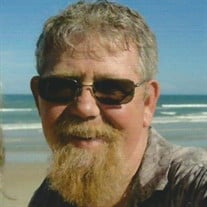 Kieth Norman Evenson 66, of Eustis, passed away peacefully in the hospital on April 22, 2019, with his wife at his side. He was born December 17, 1952, to Carroll and Marian Evenson in La Crosse, Wisconsin. He grew up in Rushford, Minnesota, where he was active in Boy Scouts. He enjoyed fishing, hunting and trapping. Kieth spent many days at Root River with his brother Ken and many of his childhood friends. He graduated from Rushford High School in 1971. Later that year he met the love of his life, Lorraine Blaskowski. In 1972 he graduated from Winona Technical Institute with a degree in welding. On July 21, 1973 he married Lorraine. They had four children. Erik, Brock, Heather and Emily. He was an excellent welder and worked for Trane Company in La Crosse, Wisconsin until 1991 when the family moved to Rhinelander, Wisconsin and he continued to work as a welder at Lake Shore. In 1997 he started his own business, Kieth's Northwoods Welding, which was very successful. He did that until 2010 when he was disabled due to lung failure. In August of 2012 he received a new set of lungs and did very well until January of 2019 due to a chronic lung rejection. He enjoyed spending time with his family whom he loved very much and he was always there for their special events. He had a good sense of humor and would have a silly pun about something and some very interesting stories. He was a very talented man who could fix almost anything. He is especially proud of a custom chopper he designed and welded. He loved riding motorcycles. He especially enjoyed his post transplant time in Florida enjoying nature, kayaking, and being at the beach. He loved taking pictures of it all and sharing it. As a full blooded Norwegian he learned to make lefse and was starting to learn rosemaling. Kieth will be deeply missed by his wife Lorraine, they were married for 46 years. He is also survived by his children, Brock Evenson (Jody) of Andover, Minnesota, Heather Evenson (Detron Williams) of Palatka, Florida and Emily Evenson (Jesse Gann) of Green Bay, Wisconsin, his mother, Marian Evenson of Rushford, Minnesota, his brother, Kenny Evenson of Rushford, his grandchildren, Aidan Paukner, Lauren Evenson and Kole Evenson. Additional survivors include several step grandchildren and numerous friends and family. Kieth was predeceased by his son Erik in 1976, his father Carroll in 2008 and his mother and father in law, Ernest and Pauline Blaskowski. Memorial services will be held at a later date in Rushford, Minnesota. Memorial services will be held on Saturday, May 11, 2019 at 11 AM in the Hoff Funeral Home, 780 N. Mill Street, Rushford, MN 55971, (855-687-4633). The family will receive friends prior to the service starting at 10 AM.

Kieth Norman Evenson 66, of Eustis, passed away peacefully in the hospital on April 22, 2019, with his wife at his side. He was born December 17, 1952, to Carroll and Marian Evenson in La Crosse, Wisconsin. He grew up in Rushford, Minnesota,... View Obituary & Service Information

The family of Kieth Norman Evenson created this Life Tributes page to make it easy to share your memories.

Kieth Norman Evenson 66, of Eustis, passed away peacefully in...

Send flowers to the Evenson family.