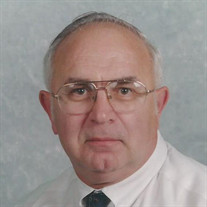 Kenneth Wade Boyette Sr. 79, of Leesburg Florida, passed away on October 23, 2019. He was born in Savannah, Georgia and moved to Leesburg, Florida in 2000 from Parrish, Florida to be close to his children after he retired. Kenneth was a retired food service director. He was a member of the Masonic Lodge, and the Shriner Organization. Ken spent the beginning part of his career in the United States Navy serving our country. He retired as a Veteran. He went on to also retire from the Army National Guard. He worked as a police officer in Hampton, South Carolina, and served as the Chief of Police in Estill, South Carolina. He owned his own catering business in Hampton, South Carolina where he enjoyed cooking and fellowshipping with family and friends. He had a special place in his heart for the dogs he raised and took care of throughout the years. All but Beau, his French Bulldog, has passed. Beau has served as a constant companion to him over the last year. He will be deeply missed by his wife Sophie. They were married for 53 years. Also, surviving are his children; Terri Krygier (Alex) of Evans, Georgia, Wade Boyette of Clermont, Florida and Karen Holmay (Nick) of Ormond Beach, Florida. He was proud of and loved his nine grandchildren and four great-grandsons. He has several surviving siblings; Carl Boyett of Bloomingdale, Georgia, Evelyn Reynolds of Birmingham, Alabama, and Larry Boyette of Guyton, Georgia. Ken was predeceased by his mom, Blanche, his dad, Benjamin, and a baby brother, J.C. Boyette. Funeral services will be held at the Grand Island Baptist Church on Saturday, October 26th at 11 AM. The family will greet friends from 10 AM until the service begins. Interment will follow immediately at Lakeside Memory Gardens in Eustis, FL. Memorials may be made to the Kitchen Fund at the Grand Island Baptist Church https://grandislandbaptist.com/give/ or to St. Jude’s Children's Hospital https://www.stjude.org. Condolences, memories and photos may be shared on the tribute wall.

Kenneth Wade Boyette Sr. 79, of Leesburg Florida, passed away on October 23, 2019. He was born in Savannah, Georgia and moved to Leesburg, Florida in 2000 from Parrish, Florida to be close to his children after he retired. Kenneth was a retired... View Obituary & Service Information

The family of Kenneth Wade Boyette Sr. created this Life Tributes page to make it easy to share your memories.

Send flowers to the Boyette family.