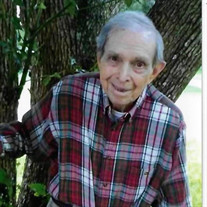 Joseph “Joe” Filler died peacefully at his Inverness, Florida home. Born on September 11, 1918 to the late Lillian Filler and Joseph Edward Filler in Warren, Ohio. In addition to his parents he was preceded in death by his brothers, Philip Filler, Harry Filler and Robert Filler. Left to cherish his memories are his loving daughter Joyce L. Filler, his two grand-daughter’s, Rachael Shea, and Amanda McCormack along with his three great-grand daughter’s, Grace McCormack, Emily McCormack and Kaitlynne Shea. While in Commercial Art School, Uncle Sam called upon him to support World War II and his love of art had to be put on hold. It was while he was in the Army he learned of his mechanical skills and graduated 1st in his class. The Army sent him to Omaha Beach at Normandy where he served under General George Patton. Along with his love of working on anything mechanical, lead him to this new career direction first at American Airmotive and then Eastern Airlines based in Miami. He enjoyed life with his late wife Bernice L. Filler for 76 years. Their love story began in the winter of 1943 and carried them through the tough years of the War. Joe loved to tell this story about the time he was coming home from the war to his military housing in Warren without knowing exactly where to find Bernice. He just started walking down the street until he heard their shared love song “I’ll Be Loving You Always”. He walked in search of the sound. When he found the source he also found Bernice playing the piano. He will be greatly missed. Arrangements are being made for him to be buried along-side of his loving wife Bernice at the Florida National Cemetery. Memories and condolences may be shared with the family on the tribute wall. Services have been entrusted to Hamlin and Hilbish Funeral Directors.

Joseph &#8220;Joe&#8221; Filler died peacefully at his Inverness, Florida home. Born on September 11, 1918 to the late Lillian Filler and Joseph Edward Filler in Warren, Ohio. In addition to his parents he was preceded in death by his brothers,... View Obituary & Service Information

The family of Joseph "Joe" Filler created this Life Tributes page to make it easy to share your memories.

Send flowers to the Filler family.