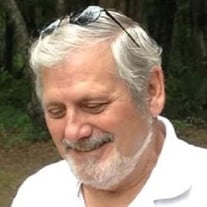 John Matthew LaPierre, 72, of Eustis, passed away on Monday June 17, 2019 with his wife, Grace, who as always, was by his side. John was born on June 27, 1946 in Minneola, New York. John was the middle of the “three favorite” sons of the late Howard and Evelyn LaPierre. His passion for woodworking and cabinetry from an early age led him into owning and operating LaPierre Cabinetry, Inc. in Mt. Dora since 1973. His beautiful kitchens, baths, entertainment centers and unique variety of woodworking creations are prevalent around Central Florida as well as numerous locations throughout the United States. John took delight in working with each of his clients over the years and we know his beautiful work is being enjoyed by the thousands to this day. John is preceded in death by his parents and brother, Mark LaPierre. John is survived by his wife Grace (Laird) LaPierre. John and Grace just celebrated their 30th wedding Anniversary in April. He is also survived by his brother, Paul LaPierre (and Cyndi) of Hunter, NY; stepbrother Roger LaPierre (and Teddie) of Long Beach, NY; half sister, Regis Scott (and Steve) of Fort Garland, CO; his daughter, Michelle (LaPierre) Gallaugher (and Gary) of Stuarts Draft, VA; his son, Matthew LaPierre (and Kelly) of Astatula, FL; his grandchildren, Ian and Emma Gallaugher and Gunner LaPierre and his nephews and niece. Stryder, his dog, will thoroughly miss their playtime and morning routine of “going to the shop” for the day. John will be missed deeply by his family and friends and the community he lived, worked and played in for the past 46 years. While he fought a stubborn and hard battle with cancer, it could never rob us of the man he will be remembered as: Kind. Caring. Intelligent. Stoic. Handsome. Hardworking, A BS'er in life and in particular, on the golf course. Joker. Storyteller. A talented kitchen designer and builder. A left handed genius. Always Dickel. Husband. Dad. G'pa. Brother. Friend. In John's memory, please consider a donation to St. Jude Children's Research Hospital. Arrangements entrusted to Hamlin & Hilbish Funeral Directors.

The family of John M. LaPierre created this Life Tributes page to make it easy to share your memories.

John Matthew LaPierre, 72, of Eustis, passed away on Monday June...

Send flowers to the LaPierre family.