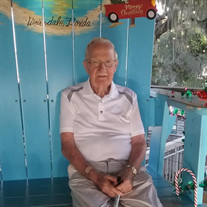 John L. Harmon of Grand Island, Florida passed away on Tuesday, December 21, 2021, at the age of 88 years. He was born in Port Chester, New York. He moved from New York to Florida in 2001. He married Mary “Marie” C. Harmon in 1982 and they have been together for 39 years in August. He worked as the District Financial Manager for Graybar Electric Company INC. for 31 years before he retired in 1987. He was also assisted with an HOA for 8 years, being one of the main reasons for the remaining golf course. John is remembered and will be dearly missed by his wife Marie C. Harmon; Sons John Harmon of Tempe, Arizona, Kenneth Harmon of Davenport, Iowa, Richard Harmon of Parlin, New Jersey, and Step son Gene Clark (Nora) of East Stroudsburg, Pennsylvania; Daughters Michelle Stachura (Tom) of Ocala, Florida, Christine Boyce (Brett) of Marlboro, New Jersey, Lori Ann Papirnik (Jim) of Freehold, New Jersey; Step Daughters Maurine Olsen of Kingman, Arizona, and Christine Meader (Jake) of Fairfield, Maine; As well as 14 grandchildren who will miss him dearly. A memorial service will be held on Wednesday, February 2, 2022 at St. Mary of the Lakes Catholic Church, Eustis, at 11:00 AM Condolences, memories, and photos may be shared on the tribute wall.

Send flowers to the Harmon family.