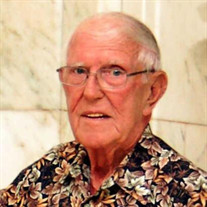 John A. Dixon, 89, passed away on November 12, 2021 in Tavares FL. He was born in Bangor ME on May 15, 1932 to Alton and Margaret Dixon of Orrington, ME. John was a U.S. Army veteran and enjoyed a career in road construction with the Maine State Highway Dept. and Great Northern Paper Company. John was most happy spending time at Moosehead Lake in Maine. He was a lover of nature, and an avid boater, canoer and fisherman, passing along these traits to his children and grandchildren. As an accomplished carpenter and woodworker, he loved building things and built family camps at Moosehead and Pleasant River Lakes, where he and his family enjoyed boating and waterskiing in the summers and snowmobiling and ice fishing in the winters. He built boats and restored canoes, which, later in life evolved into a passion for model wooden boat building. Some would say that he was obsessive in his model building, as everyone in the family has been gifted a keepsake of a beautiful model. John was also an animal lover. He taught his children to respect nature’s creatures and he had a large soft spot for dogs. Wherever he was, a Labrador retriever was close by. John was preceded in death by his wife of 61 years, Pauline, a brother Richard and his parents. John is survived by his four children: Geoffrey and his wife Peggy of Grottoes VA, Kathryn and her husband Randy Elliott of Corinth ME, Lisa and her husband Dan Bishop of Saco ME, Paula and her husband Steve Collins of Jacksonville FL and his sister Betty Ring of Orrington ME. He is also survived by six grandchildren: Jeremy and Jennifer Dixon, Nick Elliott and his wife Sarah, Caitlin Socoby and her husband Mike, Monique Gilbert and her husband Wes and Courtney Bishop. Also, six great-grandchildren: Kaitlyn and Isaac Fishel, Gavin and Rhilae St. Louis, Sydney Elliott and Elise Gilbert. A memorial service will be held at a later date.

John A. Dixon, 89, passed away on November 12, 2021 in Tavares FL. He was born in Bangor ME on May 15, 1932 to Alton and Margaret Dixon of Orrington, ME. John was a U.S. Army veteran and enjoyed a career in road construction with the Maine... View Obituary & Service Information

The family of John Alton Dixon created this Life Tributes page to make it easy to share your memories.

Send flowers to the Dixon family.