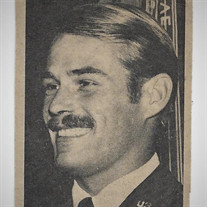 Jerry Parker Evans, Jr. of Eustis, Florida passed away on Tuesday, January 5, 2021 at the age of 73 years. He was born in Hamilton, Ohio. He graduated from the University of Iowa with a Bachelor’s degree in Business Administration and Marketing. Upon graduation, Jerry was commissioned 2nd Lt/USAF in June, 1969, and proudly served his country in the US Air Force for 5 years, serving in Texas, New York and Vietnam. He was awarded a Bronze Star for distinguished service to the 505th Tactical Control Group at Tan Son Nhut Air Base, Vietnam. After returning from Vietnam, he was assigned to the 416th Bomb Wing-SAC in Rome, New York. He met the love of his life, Carolee Jane Stewart, while stationed in San Antonio at Kelly Air Force Base. They have been married over 45 years. He was honorably discharged with the rank of Captain. Jerry started his civilian career upon joining a financial institution consulting firm and moved with Carolee to Pittsburgh, PA. Jerry worked in the financial institution industry throughout his career while providing marketing and consulting services which took him to many areas of the country. He and Carolee moved to Eustis from Greenville, South Carolina in 2005, where they resided for 21 years. Jerry was Presbyterian by faith. He was preceded in death by his parents, Jerry Parker and Ruth Evans and his cousin, Richard DuBois. Jerry is remembered and will be dearly missed by his wife, Carolee; son, Stewart R. Evans of Charleston, South Carolina; brother, Tom C. (Kristi) Evans of McLean, Virginia; nephew, Matt (Samantha) Evans and their son, Parker; niece, Karalyn (Dave) Bonfanti and their son, Oliver; niece, Kaitryn Evans; cousin David Keltner (Larisa) of Fort Worth, TX and second cousins Trevor DuBois and Dustin DuBois. A Memorial Service will be held in October, 2021, with Military Honors Ceremony and internment at the Florida National Cemetery in Jacksonville, Florida where family and friends will gather in celebration of Jerry's life and in recognition of his service to our country. Condolences, memories, and photos may be shared on the tribute wall.

Jerry Parker Evans, Jr. of Eustis, Florida passed away on Tuesday, January 5, 2021 at the age of 73 years. He was born in Hamilton, Ohio. He graduated from the University of Iowa with a Bachelor&#8217;s degree in Business Administration and... View Obituary & Service Information

The family of Jerry Parker Evans, Jr. created this Life Tributes page to make it easy to share your memories.