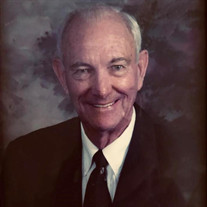 Jerry Douglas Cloud, a man of deep and enduring faith and a favorite son of Central Florida for 90 years, passed from this life at his home in Eustis early morning Sunday, November 29. Born in Orlando on October 28, 1930 and graduating from Orlando High School in 1948, he was an all-around athlete of unusual grace. Jerry was recruited to play basketball at Clemson University and graduated from the University of Florida where he pledged Phi Delta Theta fraternity. After serving in the Air Force stationed at RAF Bentwaters, UK, Jerry embarked on a career in the citrus industry in which his father, Holman R. Cloud, was a founder of The Minute Maid Company. His mother, Mabel Cloud, was a pillar of First Baptist Orlando. Jerry was a lifetime member of the Fellowship of Christian Athletes, Florida Fruit & Vegetable Association, Country Club of Orlando, and Bible Study Fellowship, and was a longtime member and bible studies teacher at Asbury United Methodist Church, Maitland. A gifted and enthusiastic wing shot, Jerry hunted quail and convened many of his lifelong high school friends for annual dove hunts. The integrity of his faith was a constant throughout his life and he was beloved by all who knew him virtually without exception. He is survived by his sister, JoAnn Cloud Dyer, his wife of 50 years, Barbara Khonigon Cloud, their son, Kendrick Edward Cloud, two children from a prior marriage, Kimberly Cloud Locke and Christopher Holman Cloud, a stepdaughter, Lorinda Pearce Langin, six adoring grandchildren, and by Joe Justice of Charlotte, NC , who Jerry and Barbara helped to rear and set on a path in life. There will be family graveside gathering and a service to follow at a date to be determined. In lieu of flowers the family asks that you support Bible Study Fellowship (bsfinternational.org). Memories and condolences may be shared with the family on the tribute wall. Services have been entrusted to Hamlin and Hilbish Funeral Directors, Eustis, FL

Jerry Douglas Cloud, a man of deep and enduring faith and a favorite son of Central Florida for 90 years, passed from this life at his home in Eustis early morning Sunday, November 29. Born in Orlando on October 28, 1930 and graduating from... View Obituary & Service Information

The family of Jerry Douglas Cloud created this Life Tributes page to make it easy to share your memories.

Jerry Douglas Cloud, a man of deep and enduring faith and a favorite...

Send flowers to the Cloud family.