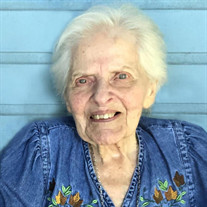 Jeanne Mendall Kauffman passed away Sunday, August 9th at the age of 93. Jeanne was born in Middleboro Massachusetts to Marjorie Bosworth Kendall and Ralph Bertrand Mendall. She was the last survivor of 5 children. She lived in Grand Island, Florida for most of her married life. She married John Howell Kauffman Jr. August 20th, 1950. They were married for 67 years until his death in 2017. She had four children: John Howell Kauffman III (Howie) who married Nance Chuang, Linda Marguerite who married Rance Braley, Julie Jeanne, and Marjorie Mell who married Jack Carter. She was an amazing, imaginative, loving mom. In fact, she was a mom to any child she met. As a young woman she was a beloved volunteer at Sunland Children’s hospital. She was also an active member of St. Thomas Episcopal Church. She was a staple in the church choir for over 40 years. Singing was one of her greatest loves. She helped create and then co-chaired the church thrift shop for over 20 years. Each Christmas she would take a bunch of discarded, scraggly dolls, and turn them into Christmas treasures for children. After the death of John, Jeanne lived in Archer with her daughter, Linda. She lived the final few months of her life at Williston Care Center in Williston. Jeanne was the proud mother of four children, ten grandchildren and 14 great-grandchildren. She will be dearly missed, for she was dearly loved. Jeanne’s ashes will be interred next to her husband’s at St. Thomas Episcopal Church in a private, outdoor ceremony. There will be a memorial service via Zoom under the direction of her grandson, Reverend Joshua Braley on Saturday, August 15th Mom loved flowers. No matter how she was feeling, especially the last year of her life, fresh flowers by her side brought a huge smile to her face. If you would like to do something in her memory, please send flowers to someone you love who is still with you. We can think of nothing that would bring her more joy. Services have been entrusted to Hamlin and Hilbish Funeral Directors, Eustis, FL. Memories and condolences may be shared with the family on the tribute wall.

Jeanne Mendall Kauffman passed away Sunday, August 9th at the age of 93. Jeanne was born in Middleboro Massachusetts to Marjorie Bosworth Kendall and Ralph Bertrand Mendall. She was the last survivor of 5 children. She lived in Grand Island,... View Obituary & Service Information

The family of Jeanne Mendall Kauffman created this Life Tributes page to make it easy to share your memories.

Jeanne Mendall Kauffman passed away Sunday, August 9th at the...

Send flowers to the Kauffman family.