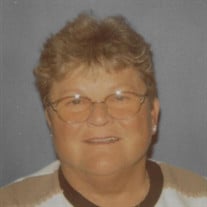 Jane Iddings Beattie, 80, November 1, 1941 - March 5, 2022. Jane was person in life that made one laugh a little louder, smile a little brighter and live a little better. She passed into our Father's arms on Saturday, March 5 after a long struggle with medical issues. A Celebration of Life was held on March 12 at Country Club Manor Clubhouse for friends and family. Jane was born on November 1, 1941 in Geneva, NY to the late Howard and Margaret (Coffin) Iddings. Jane is a 1960 graduate of Penn Yan Academy. Shortly thereafter, married J. Richard Beattie and raised her children on the family farm on Johnson Road, Penn Yan. Summers were spent at the family cottage with her children on Seneca Lake, where she enjoyed fishing and a cold Genny. Jane was very involved with her children. She coached the girls Softball team in Bellona for many years and lead them to win several championships. She also enjoyed being a Den mother for the Boy Scouts. Jane was a school bus driver for Penn Yan school district for 9 years before going to work at the VA Hospital in Canandaigua, NY, 1979, retiring in 2003. After retirement Jane moved to Eustis, Florida, where she stayed until her death. She had many friends and enjoyed playing cards and other board games. Jane was very active with the Newcomers group and enjoyed the many friendships, luncheons and outings. She was a fun loving, adventurous person who loved riding her Harley, traveling to Alaska and Europe and recently enjoyed a hot air balloon ride. Survived by her loving children: Kimberlyn Beattie, St. Petersburg, FL; Mark J. Beattie; feline companion Ty. Her Grandchildren: Timothy Joseph Heckman, Largo, FL; Kara Elizabeth Heckman, St. Petersburg, FL; Ryan Beattie, Rochester, NY. Her sisters: Diane Iddings Miller, Eustis, FL; Madeline Iddings Curtiss, Bellona, NY. Her special companion, Bill Butts, Eustis, FL . Several loving and cherished Nieces, Nephews and Cousins. Predeceased by her parents, Howard Iddings and Margaret Coffin Iddings; her sister, Joan Iddings Carpenter, brother in laws, Jacob Carpenter and Augustus Curtiss. Florida Memorial Service will be held on Saturday, March 12 at 2:00 PM at Country Club Manor in Eustis. New York - A Memorial will be held in Bellona during the summer months, where she will be interred with her loving parents in the Iddings family plot. Donations in her memory may be made to Bellona Memorial Presbyterian Church, Bellona, NY 14456.

Jane Iddings Beattie, 80, November 1, 1941 - March 5, 2022. Jane was person in life that made one laugh a little louder, smile a little brighter and live a little better. She passed into our Father's arms on Saturday, March 5 after a long... View Obituary & Service Information

The family of Jane I. Beattie created this Life Tributes page to make it easy to share your memories.

Send flowers to the Beattie family.