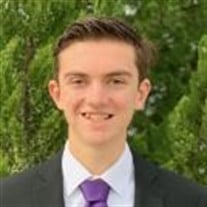 Jackson Keith Edwards, 16, son of Special Agent and Mrs. Christopher (Roxanne) Edwards of Seymour Johnson Air Force Base, Goldsboro, North Carolina, died May 18 in Goldsboro. Jackson was a rising junior at Eastern Wayne High School where he played saxophone in the school band. He was active in the Protestant Youth Ministries at the Base Chapel community at Seymour Johnson. Jackson was born in San Antonio, Texas on March 14, 2003 and lived with his well-traveled Air Force family aboard military bases in Hawaii, Georgia, Texas and North Carolina. He was known for his kind and humorous rapport with friends and classmates and for his appreciation of graphic arts, skateboarding, video games and music. In addition to his parents, Jackson is survived by siblings Bethany Jade Edwards, Justin Christopher Edwards, Frankie Anne Boyette and Kylie Sharon Edwards; an abundance of cousins, aunts and uncles; his grandfathers, Senior Master Sgt. Terry Edwards, USAF(retired)and Col. Keith Oliver, USMC (retired); and by his great grandparents, Mr. and Mrs. Thomas L. Comer, Sr. of Yankeetown, Florida. He was predeceased by his grandmothers, Mrs. Sharon Edwards and Mrs. Ceresse Oliver. His family takes great comfort and confidence in Jackson's faith in Jesus Christ and in a certain reunion in Heaven's realms. Funeral services are scheduled for 2 p.m. Saturday May 25 at the Base Chapel aboard Seymour Johnson. A visitation period will be held at the chapel at 1 p.m. Interment will take place at Greenwood Cemetery in the family's maternal hometown of Eustis, Florida at a date to be determined, when Jackson will be buried next to his grandmother Ceresse Comer Oliver. In lieu of flowers, the family respectfully requests that donations be considered to the foundation being formed in Jackson Edwards' name to help teens and young adults combat depression and severe anxiety. Contributions may be sent to Edwards, Inc., LLC; Account# 9100663963; Routing# 302075830; 9990 Park Meadows Drive, Lone Tree, CO 80124. Condolences may be left on this site.

The family of Jackson Keith Edwards created this Life Tributes page to make it easy to share your memories.

Send flowers to the Edwards family.