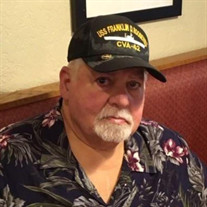 On Monday December 21st, 2020, after valiantly battling health ailments, the world lost a loyal and loving husband, an incredible father, adoring grandfather, faithful older brother, and most of all, a true patriot and veteran. Gordon Thumudo is survived by his wife of 57 years Madeline “Cookie/Maddy” (Roman), 3 children Dawn Marie (Tom), Brad Joseph (Tina), Wendi Ann, grandchildren James Edward and Abigayle Grace and his brother Robert. Gordon spent the last 57 years married to the love of his life, Madeline (Roman). They fell in love early in life as teenagers, and their story has spanned more than half a century together. After graduating high school, he enlisted in the US Navy and was stationed on the USS Franklin D. Roosevelt aircraft carrier. He loved his country and was proud that he was given the opportunity to explore the world through his service and to defend our flag and freedom during the Bay of Pigs. After he was discharged from the Navy in 1963, Gordon and Maddy married and began their family. Over the decades, they enjoyed many holidays and celebrations with their family and loved ones. Some of Gordon’s fondest memories were of the many years of adventures camping in their RV with the Metropolitan chapter of the FMCA (of which he was a past President). The people he met during this time would become lifelong friends and were responsible for many of his fondest memories to look back on. They also enjoyed cruising with family and friends throughout the islands of the Caribbean in their later years. Gordon was an active member of the group Squadrons and Shipmates, an organization for former naval carrier airmen and sailors. It is here he was able to reconnect with numerous old shipmates and was recently elected VP. He enjoyed the camaraderie he found with these old service friends and looked forward to their talks, travels and shared experiences over the years. In 2017, shortly after retirement, Gordon and Maddy relocated from their home in NJ to Tavares, FL. He quickly acclimated to his new surroundings and made many friends in this new community. Whenever the chance presented itself, he loved to boast about his extracurricular activity as a member of the Lighthouse Players of Royal Harbor, a group that would reenact old time radio shows. Gordon could sometimes come across as gruff, but those that truly knew him, knew he had a heart of gold and would give the shirt off his back and last dollar in his wallet to help those that he loved. Aside from his marriage to Cookie, and the birth of his children, he was never prouder than the day he became a grandfather. Gordon may never know how many lives he touched, but those who had the true honor of knowing him, especially his family, will miss him beyond words. We wrote your name in the sky, but the wind blew it away. We wrote your name in the sand, but the waves washed it away. We wrote your name in our hearts, and forever it will stay. We honor a life that was lived to the full, we honor a spirit, now free. You will long be remembered, whenever we say: “Fair winds and following sea!” This is not a goodbye Dad, Mom misses you more than words can convey, but we will all take great care of her as you did in your life. So, keep a seat open for us and make sure to show us around when we meet again. Xoxo

On Monday December 21st, 2020, after valiantly battling health ailments, the world lost a loyal and loving husband, an incredible father, adoring grandfather, faithful older brother, and most of all, a true patriot and veteran. Gordon Thumudo... View Obituary & Service Information

The family of Gordon Joseph Thumudo created this Life Tributes page to make it easy to share your memories.

Send flowers to the Thumudo family.