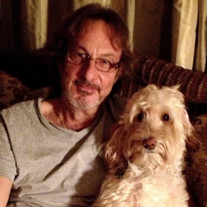 George Contorakes, 67, passed away Saturday, November 2, 2019 unexpectedly in his home. His sudden passing leaves behind his beloved wife of 45 years, Maria Contorakes and their dog Zappa; as well as his sister, Pia Contorakes Oliver and her husband, Larry and his brother, Evan Contorakes and his wife, Cheri. He is preceded in death by his father, John George Contorakes in 2001 and his mother, Anne Lentzas Contorakes in 2003. George was born in Cleveland, Ohio July 6, 1952. His mother’s side of the family immigrated from Greece. Shortly after his birth, the Contorakes family moved to Washington, Pennsylvania where George spent his childhood. When he wasn’t working in his family restaurant, Shorty’s Hotdogs, he was dedicating himself to his studies. George graduated high school in 1970 as Washington High School’s Valedictorian. He went on to attend University of Miami as a Communication Major. It was within days of his freshmen year that he met Maria. She ended up in George’s dorm by happenstance and with one look at his blonde curls and tennis outfit she knew she was interested. They had an ardent love affair and were married shortly after graduation in 1974. George’s other love was photography and it was his passionate dedication to his craft that helped him develop a successful career as one of Miami’s premier commercial and product photographers. Seduced by the art at a young age, he received his 1st camera at just 12 years old and never looked back. He started his career as a studio and product photographer and quickly found enough success to establish his own studio in 1980. His work has been featured on the cover of Business Week Magazine, and he has worked with established brands such American Express, Coca Cola and Kodak just to name a few. Recent jobs had taken him to Russia, Africa, Mexico, Canada and all throughout the US on his adventure traveling the world shooting people and product on location. Aside from a thriving career, George was fiercely dedicated to his hobbies. An avid hunter, George roamed the African plains for big game, scanned the mountain skies of Argentina for dove, and trekked through the tundra in search of caribou. He was a true sportsman’s and an active member of both the Volusia County Gun & Hunt Club and the Eustis Gun Club. His love for the outdoors and methodical nature meant that when he wasn’t hunting, he was fishing. Many an evening were spent watching the sunset in knee-deep water while fly fishing with his nephew, Sam. In his retirement years, George also became very involved in his local Pilates studio, On the Run Fitness and Pilates, and even helped manage the studio on occasion. But not all of George’s interests were so physical in nature, he spent many nights enjoying a good cigar on the patio and playing with his dog Zappa. We know he will be deeply missed by the friends he made along the way. We thank them for their comfort during this difficult time. It feels appropriate to bid George farewell for now with a quote from his favorite artist Lyle Lovett: “So like the years and all the seasons pass And like the sand runs through the hour glass I just keep on running faster Chasing the happily I am ever after” George always chased what made him happy in his life, and we wish him peace and happiness on his journey, but he will be sorely missed by his loving wife, friends and family. May he rest in peace. Family and friends are invited to gather on Monday, December 2, 2019 from 4:00 - 5:00 pm with a memorial ceremony starting at 5:00 pm at the Eustis Women’s Club, 227 N. Center St., Eustis, FL 32726 Reception to follow at the Contorakes residence at 3035 Windham Drive Eustis FL 32726 Should loved ones desire to make a donation, in lieu of food or flowers we kindly ask for any donations to be made to the Humane Society of Lake County. www.humanelake.com

George Contorakes, 67, passed away Saturday, November 2, 2019 unexpectedly in his home. His sudden passing leaves behind his beloved wife of 45 years, Maria Contorakes and their dog Zappa; as well as his sister, Pia Contorakes Oliver and her... View Obituary & Service Information

The family of George J. Contorakes created this Life Tributes page to make it easy to share your memories.

Send flowers to the Contorakes family.