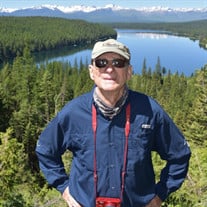 Dr. Freddie R. Merritt of Eustis, Florida passed away on September 21, 2020. Born on March 19, 1943 in Worth County, Georgia, Freddie (or “Dr. Merritt” to thousands of clients that he had the joy of serving during his 52-year veterinary career) was one of seven brothers. In 1956, his mother moved the family to rural Pasco County, Florida where Freddie worked as a ranch hand for an uncle and developed a love for the outdoors and animals. Graduating from Pasco High School in 1961, he attended the University of South Florida, the University of Florida, and finally, Auburn University, where he graduated as valedictorian of his class in 1968 with his degree of Doctor of Veterinary Medicine. Freddie served in the United States Air Force from 1968 to 1970 at Lackland Air Force Base in San Antonio, Texas, and upon his honorable discharge, moved to Miami, Florida, where he entered private practice in 1970. In 1981 he relocated his family to Eustis, Florida and opened Merritt Animal Clinic, which he operated for the next twenty-five years. In 2007, Freddie made an attempt at retirement, but when his son, Gregory, opened his own veterinary clinic in Mount Dora in 2014, Freddie could often be found performing surgery when he was not fishing or traveling – his other passions. Dr. Merritt cared deeply about his patients and clients, spending countless weekends and nights caring for them, performing house calls, and calling clients to update them on the status of their beloved pets. Freddie had a unique charisma and never met a stranger. He loved the outdoors and nature as well as travel. His journeys took him to all fifty states as well as all seven continents. Whether it was a photo safari in the African bush, sleeping in a yurt in Mongolia, renewing his marriage vows in Morocco, snook fishing in the Everglades, or penguin watching on the Antarctic Peninsula, Freddie loved life and maximized every moment. Freddie’s greatest passion, however, was his family. He met the love of his life, Kitty, in Miami in 1970 and they married April 22, 1972. Throughout their 48 years of marriage they traveled the world and shared many adventures together. Freddie was the loving and devoted father to two sons, Jason and Gregory, and to their wives, Frances (Hovis) and Karen (Coker). Among his favorite activities was doting on his three grandchildren, Katy, Aiden, and Calvin. Freddie was a devoted son to his mother, Martha Wilkerson, and loved spending time with his six brothers. Freddie is survived by his wife, Kitty; his sons, Jason and Gregory; daughters-in-law, Frances and Karen; grandchildren, Katy, Aiden, and Calvin; and his brothers, Marvin, Eddie, and John. Freddie was preceded in death by his mother, Martha Wilkerson, his father, Pleamon Merritt, and brothers, Jimmie, Dennis, and Walter. Private services will be coordinated by Hamlin & Hilbish Funeral Directors of Eustis, Florida, and his memorial service may be viewed beginning at 10 a.m. on Saturday, October 3, 2020 at https://www.fpceustis.com/live-feed. In lieu of flowers, donations may be made to the Leukemia and Lymphoma Society (https://donate.lls.org/lls/donate). Services have been entrusted to Hamlin and Hilbish Funeral Directors, Eustis, FL. Memories and condolences may be shared with the family on the tribute wall.

The family of Freddie Roger Merritt created this Life Tributes page to make it easy to share your memories.

Send flowers to the Merritt family.