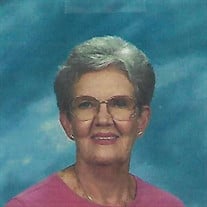 Evelyn Ogletree Kennedy, 99 of Eustis died August 6, 2021. She was born in Siloam, Georgia, on November 7, 1921, the only child of Alva H. and Jennie (Nelson) Ogletree. She moved with her parents to Lake County in 1926. She lived in Umatilla five years, moving to Eustis in 1931. She graduated from Eustis High School in 1939 and attended Stetson University for two years. In 1944 she married Joe B. Kennedy who preceded her in death in 1981 after 37 years of marriage. He served as Agent for Chevron Oil Company and Mrs. Kennedy worked with him there for 20 years. She was a member of the First Baptist Church, Eustis, and served in several capacities there. She taught an adult Sunday School Class, served as President of the Women’s Missionary Union, and was on the Prayer Chain of the church. She was a member of the P.E.O. sisterhood and at one time was a member of the Camellia Garden Club of Eustis. She served on the committee for the annual Eustis High School reunion for many years. She spent summers at New Smyrna Beach in the 1980’s and 90’s and enjoyed many hours under an umbrella at the water’s edge. She learned ballroom dancing at Starlight Ballroom in Leesburg after she was 70 years old and enjoyed four years at the studio and entering competitions in various cities in Florida. She was a staunch Gator fan for most of her life. She took great pride in all her children, grandchildren, great-grandchildren and great-great grandchildren. She is survived by two sons, A. Joseph Kennedy (Linda) of Grand Island, Edward M. Kennedy (Jennifer) of Apopka, and one daughter, Jane K. Bender (Ralph) of Winter Park; six grandsons, Matthew, Joseph, John Bender, Brett Parent (Peggy), and Ryan Parent (Elizabeth) and Steven Wheeler and 5 great grandchildren, Brent, Peyton, Ryann and Gradey Parent and Jackson Bender, and great-great grandchildren Rowyn Parent, Brent Lee Parent. There will be a service in the Hamlin & Hilbish Chapel, at 11 AM, on August 18th with Rev. J.P. Pearson, of Lifepointe Church, officiating. Private committal services will be held in Greenwood Cemetery, Eustis. To watch the chapel service online, click the link below at the service time of 11:00 AM on Wednesday, August 18 or any time after to view: https://webcast.funeralvue.com/events/viewer/58720

Evelyn Ogletree Kennedy, 99 of Eustis died August 6, 2021. She was born in Siloam, Georgia, on November 7, 1921, the only child of Alva H. and Jennie (Nelson) Ogletree. She moved with her parents to Lake County in 1926. She lived in Umatilla... View Obituary & Service Information

The family of Evelyn O. Kennedy created this Life Tributes page to make it easy to share your memories.

Send flowers to the Kennedy family.