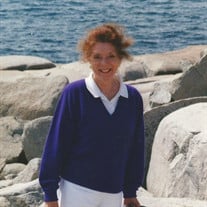 Dorothy May Smith, age 92, passed away on December 1, 2019. She was born in Aberdeen, Scotland on April 12, 1927 to Allan and Fanny Tough. She was baptized on June 9, 1927 by the Minister of Gilcomston Parish in Aberdeen. Her father, Allan, was a ships engineer and came to Miami on a voyage with the family including Fanny, Dorothy, and her sister, Margaret. He and the family were stranded after the hurricane of 1929 and decided to stay in Florida. Dorothy met Raymond Smith when he was stationed in Miami during World War II, and they later got married in 1954. Dorothy worked as the executive secretary to Stanley Whitman, owner of the world famous Bal Harbour Shops, for many years. In 1995, she and Raymond retired to Eustis, Florida to be closer to their oldest son’s family. After her husband’s passing in 1996, Dorothy worked as a volunteer secretary for the First Presbyterian Church of Eustis. Nine years later, she moved back to Miami to follow both her sons and their families and spend summers with her grandchildren. Throughout her life, Dorothy enjoyed traveling all over the United States with her family, especially her sister-in-law and niece, Mary and Mary Kay. Later in life, she was able to show her sons and grandchildren many of her favorite places on family vacations. Dorothy is survived by her two sons, Jim and Ray Smith, and her four grandchildren, Ariel, Chanin, Allyson, and Alex Smith. Her final resting place will be Greenwood Cemetery next to her beloved husband, Raymond. A Graveside service in memory of Mrs. Dorothy May Smith, will be held on Thursday, December 05, 2019 at 11:00AM at Greenwood Cemetery, located at: 220 Haselton St Eustis, FL 32726 Memories and condolences may be shared with the Smith family on the tribute wall. Services have been entrusted at Hamlin and Hilbish Funeral Directors, located at: 326 East Orange Ave. Eustis, FL 32726.

Dorothy May Smith, age 92, passed away on December 1, 2019. She was born in Aberdeen, Scotland on April 12, 1927 to Allan and Fanny Tough. She was baptized on June 9, 1927 by the Minister of Gilcomston Parish in Aberdeen. Her father, Allan,... View Obituary & Service Information

The family of Dorothy May Smith created this Life Tributes page to make it easy to share your memories.

Send flowers to the Smith family.