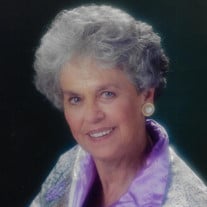 Dorothy Jane Roberts (Mercurio) of The Villages passed away February 21, 2021 at the age of 91. She was a loving wife, mother, grandmother, and great grandmother. Dorothy was born July 6, 1929 in Toledo, Ohio to Peter and Marie Mercurio. She married Ignace A. Roberts on August 26, 1950. Together they had 9 children. They spent over 58 years together before his passing in 2009. She is survived by Rose Shearin of The Villages, Mary Goins of Monroe Michigan, Rita Reuter of Eustis Florida, William Roberts of Louisville Kentucky, Christine Webb of Tazewell Tennessee, John Roberts of Leesburg Florida, Rebecca McCollum of LaSalle Michigan, and Raymond Mercurio of Toledo Ohio. She is also survived by 16 grandchildren and 11 great grandchildren. She was predeceased by her parents, husband, daughter Katherine McNamera and son Ignace M. Roberts, sister Rita Mackin, brothers Robert, Albert, Jerome, Paul, and grandchildren Joseph Webb Jr. and Justin Roberts. She grew up in Toledo Ohio, attended high school at Notre Dame Academy. After marriage she moved to LaSalle Michigan where she raised her family. She was employed in the health care field as a CNA. In 1993 She retired to Eustis Florida where she was a member of St. Mary’s of the Lakes Catholic Church. In 2010 she moved to Lady Lake then later to The Villages. She was a member of the St. Timothys Catholic Community, the St. Timothy Ladies Guild and the K of C Ladies Auxiliary. She made many new friends including a birthday group of neighbors and friends. She enjoyed luncheon outings, arts and crafts, movies, bingo, and casino trip and cruises. She was the matriarch of the family and will truly be missed. She had a huge heart full of love for family and is now in the kingdom of heaven among the angels. A viewing will be held from 12:00pm to 1:00pm Tuesday, March 2, 2021 at Hamlin and Hilbish Funeral Home, Eustis Florida. A Funeral Mass will take place the following day at St. Timothy Catholic Church, Lady Lake at 8:30am. Internment will be held at a later date at the Florida National Cemetery in Bushnell Florida. In lieu of flowers, donations in her memory may be made to the Cornerstone Hospice or the American Hearts Association. Memories and condolences may be shared with the family on the tribute wall. Services have been entrusted to Hamlin and Hilbish Funeral Directors, Eustis.

Dorothy Jane Roberts (Mercurio) of The Villages passed away February 21, 2021 at the age of 91. She was a loving wife, mother, grandmother, and great grandmother. Dorothy was born July 6, 1929 in Toledo, Ohio to Peter and Marie Mercurio. She... View Obituary & Service Information

The family of Dorothy J. Roberts created this Life Tributes page to make it easy to share your memories.

Dorothy Jane Roberts (Mercurio) of The Villages passed away February...

Send flowers to the Roberts family.