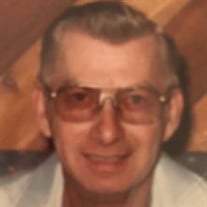 Donald ”Don" C. Spencer, Sr. February 9, 1932 – August 18, 2020 Donald “Don” C. Spencer, Sr. 88 of Mt. Dora, Florida, passed away at home Tuesday, August 18, 2020. He was born in Coal Grove, Ohio to Myrtle Ferguson Spencer (mother) and Robert Dixon Spencer (father) both deceased. Don moved to Mt. Dora in 1960, where he worked at Joe Creamons Chevrolet for 9-10 years, then Interstate Diesel in Orlando for several years. After that he worked for Cecil Clark Chevrolet, then E.L. Williams Tire Store and when it closed he went to work for All County Collision. Don was a member of the Eustis Elks # 1578 for 47 years. He was Exalted Ruler in 1980-81. Don and his wife Barbara enjoyed camping and canoeing with many friends thru the years. After retiring he and Barbara traveled in their motor home. A friend, Dennis Almand of Fountain Bridge Hunting Club in Cuthbert, Georgia asked if they would be interested in coming to manage his hunting camp and lodge. Don and Barbara moved to Georgia and enjoyed 12 years of taking care of the camp while residing there. Don loved working with the tractor and preparing all of the food plots to get them ready for planting. They moved back to Mt. Dora in 2014. Don is survived by his wife Barbara Spencer of Mt. Dora, Florida, daughters Pam Saweikis of Orlando, Florida, Selena Keller of Havana, Florida, Melody Sullivan of Preston, Washington; sons Robert Spencer of Umatilla, Florida, Mark Keller of Cobble Hill, British Columbia, Canada.; 9 Grandchildren; 21 Great Grandchildren. In addition to the sons listed, Don is predeceased by another son, Donald “Donnie” Spencer, Jr. Graveside services will be held at Lakeside Memory Gardens Cemetery, 36601 County Road 19A, Eustis, Florida on September 10th at 11:00 am. Arrangements are being provided by Hamlin & Hilbish Funeral Home in Eustis. In lieu of flowers donations may be made to Cornerstone Hospice, 2445 Lane Park Road, Tavares, Florida 32778-9648, in memory of Donald C. Spencer, Sr.

The family of Donald "Don" C. Spencer created this Life Tributes page to make it easy to share your memories.

Send flowers to the Spencer family.