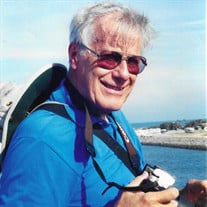 David M. Levee of Eustis, Florida passed away on Wednesday, September 23, 2020 at the age of 88 years. David was born in Syracuse, New York. He is preceded in death by his parents Myron “Sparky” and Audrey Levee of Fayetteville, NY. He proudly served his country in the US Army for four years and was stationed in Germany as a Staff Sergeant. He began his teaching career at Fayetteville Manlius School district, earning his Bachelor’s degree at Syracuse University and became a teacher of English literature at Broome Community College in Binghamton, New York, where he taught for 28 years. As part of his teaching, David ran the Lively Arts Club, where he took student on tours of art museums. He loved to sing and was an early member of the Madrigal Choir in Binghamton. He was a tenor and had a beautiful voice. He moved to central Florida from Greene, New York in 1996. He was a member of St. Patrick Catholic Church in Mount Dora. He was also a member of the Mount Dora Library Book Club and member and past President of the Mount Dora Art League. David is remembered and will be dearly missed by his wife Phyllis of 57 years, daughter, Darcy Levee (Rick) Oshiro of San Jose, California, daughter, Micheen Levee (Bill) Schrier of Marina and son, Robert “Sparky” Levee of San Francisco, California; and two athletic and brilliant granddaughters, Alex and Aiden. David loved classical music, room temperature lager and submarine movies. David, we will miss your gentle spirit, your wonderful dry wit and the sight of you, sunning yourself in a beach chair with a favorite book in hand. Memorial Gifts may be sent to Broome Community College Foundation or to a local food bank. Condolences, memories and photos may be shared on the tribute wall.

David M. Levee of Eustis, Florida passed away on Wednesday, September 23, 2020 at the age of 88 years. David was born in Syracuse, New York. He is preceded in death by his parents Myron &#8220;Sparky&#8221; and Audrey Levee of Fayetteville,... View Obituary & Service Information

The family of David M. Levee created this Life Tributes page to make it easy to share your memories.

Send flowers to the Levee family.