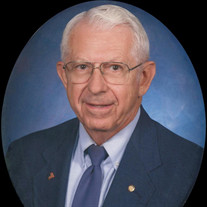 David Henry Ayers, of Lakeview Terrace in Altoona, was re-united with his beloved wife Alice Marie Blackburn Ayers on September 23, 2021. He was born May 21, 1937 in Waterloo, Indiana. David is survived by Tennessee relatives, sister-in-laws, Liz Blackburn, Leona Fern Blackburn and nephews, Rick and Tim Blackburn. He moved to Eustis, Florida, at age 12 and graduated from Eustis High School in 1955. He played football and baseball, and was a member the Sea Scouts in Eustis. Learn about Sea Scouts from David himself, in this video (https://vimeo.com/614475400). David’s friends Gene and Cordella LaRoe, introduced him to Lake County’s 4-H Director, Alice Marie Blackburn, in 1968. They were married in 1972 and lived in Mt. Dora and Howey until Alice’s death in 2014. David was a loving and devoted husband to Alice. They had no children of their own, but through 4-H had a strong influence on thousands of young people. David noticed details and enjoyed work in technical fields. He assisted his father with a radio/TV repair business in Eustis and kept 2-way radio systems running for many businesses and law enforcement. He was a skilled audio technician, who volunteered hundreds of hours at community events, such as the Lake County Fair, City of Howey, Lake County Folk Festival, over 60 educational programs for expectant mothers, his church, and numerous 4-H activities. David was Alice’s number one 4-H volunteer. He saw needs and jumped in to help. She was registrar for the national 4-H conference in Orlando, but there was no computer program to track sessions that over 600 people selected individually. David had no formal computer training, but he wrote the registration software by using an Apple 2E and consulting with a UCF student. David became a self-taught first-generation information technology specialist, and soon was hired by the University of Florida as the Computer Resource Technician for Central Florida. He installed computer equipment, patiently taught computer classes and was a ready consultant, highly valued by Extension agents. David became a self-trained weather expert. He spent many hours at the Lake County Agricultural Center helping citrus agent, John Jackson, alert growers about impending cold weather. During freeze events he spent the night collecting & distributing weather information to help farmers make critical decisions. David designed an automated weather system for Lake and Orange counties in the late 1980’s. When the State of Florida funded a network of automated weather towers, he provided technical support to set up a state-wide system. In 1996, David and Extension Agent John Jackson installed 16 weather towers from Homestead to Umatilla. The Florida Automated Weather Network (FAWN) is still in operation delivering real time weather data on a web site. Listen to details on another David Ayers/John Jackson video (https://vimeopro.com/user1997285/citrus-hall-of-fame-oral-histories/video/148664400). David was known to hundreds of farm equipment operators as ‘Sloppy Sam.’ Once a year David’s alter ego emerged as a wacky character who entertained hundreds while teaching safe use of equipment and farm supplies. David leaves many friends saddened at his passing, but we know he is so happy to be with Alice again. A service for this loving, quiet, supportive gentlemen will be held October 22 at 11 am at the First Presbyterian Church of Eustis, 117 S. Center Street, Eustis, FL 32736. A reception will follow the service. In lieu of flowers, contributions to the First Presbyterian Church are encouraged. David and Alice loved their church and were active members. Their legacy fund will allow the church to deal with a variety of issues. Condolences, memories and photos may be shared on the tribute wall.

David Henry Ayers, of Lakeview Terrace in Altoona, was re-united with his beloved wife Alice Marie Blackburn Ayers on September 23, 2021. He was born May 21, 1937 in Waterloo, Indiana. David is survived by Tennessee relatives, sister-in-laws,... View Obituary & Service Information

The family of David H. Ayers created this Life Tributes page to make it easy to share your memories.

David Henry Ayers, of Lakeview Terrace in Altoona, was re-united...