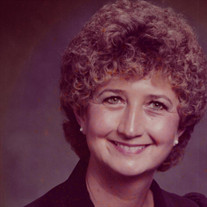 Cynthia Marie “Cindy” Simmons of Eustis, Florida passed away on February 5, 2022 in Mount Dora, Florida at the age of 86. Cindy was born December 30, 1935 in Savannah, Tennessee to her parents Owen and Evelyn Pickens. She met the love of her life, Bill Simmons, in Bemis, Tennessee and they were married in 1952. They moved to Missouri where Cindy gave birth to their four daughters. Cindy and Bill settled in Oswego, Illinois where they raised their girls and lived for over 25years. Cindy was a dedicated and loving mother. Southern cooking was her specialty, but her family’s favorite was her chocolate pie. She loved to read and was also a great seamstress, making her daughters’ dresses for every occasion. Cindy worked as a bookkeeper for several companies and was elected to the office of Village Clerk for Oswego. Weekends were often spent with their many friends and neighbors hosting backyard barbecues and playing cards. Retirement took her and Bill to Eustis, Florida where they joined a country club. She became an avid golfer and she and Bill once won the title of Couples Club Champions. Her compassionate nature led her to years of volunteer work as a hospice caregiver. Cindy was a lifetime member of the Royal Order of Moose. Cindy is survived by her husband of 70 years, William Simmons, of Eustis, FL; daughters Debbie Fox of Mount Dora, FL, Rose Hiney of Grand Island, FL, Connie Shick of Eustis, FL, and Lois Warwick (Ron) of Parker, CO.; grandchildren Ashley, Carter, David, Kendra, Jennifer, Nicole, Sara, Savannah, and Tony; great-grandchildren Braelyn, David, Emma, JJ, Jase, and John; great-great-grandchildren Tristanna and Mya; and sisters Brenda Borneman, Ashburn, VA and Janet Bush, Murfreesboro, TN. Condolences, memories and photos may be shared on the tribute wall. A Celebration of Life will be held 11:00 a.m. to 2:00 p.m. Sunday, February 20, 2022 at the Golden Triangle Moose Lodge located at 1901 Titcomb St., Eustis, FL. 32726. In lieu of flowers, donation may be made in her name to the Altzheimer's Association - www.alz.org

Cynthia Marie &#8220;Cindy&#8221; Simmons of Eustis, Florida passed away on February 5, 2022 in Mount Dora, Florida at the age of 86. Cindy was born December 30, 1935 in Savannah, Tennessee to her parents Owen and Evelyn Pickens. She met the... View Obituary & Service Information

The family of Cynthia Marie Simmons created this Life Tributes page to make it easy to share your memories.