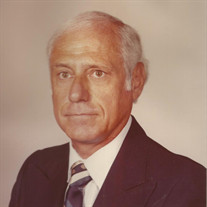 Clifford Gerald St. Louis, born November 10, 1936 in Umatilla, Florida passed away of September 17, 2019 at the age of 82. He established his own business, St. Louis Heating And Air Conditioning in the 1960’s. After 50 years of running his very successful Lake County business he retired. He generously helped many people unselfishly and without expecting recognition. After retirement he was able to enjoy his place at the beach and his hobbies, tennis, fishing and traveling. Clifford was one of the original members of St. Mary of the Lakes Catholic Church of Eustis. He served in the National Guard and was a member of the Lake County Farm Bureau, Kiwanis Club, Chamber of Commerce and a Director of the First Union Bank. He also supported the Florida Sheriff’s Association for 57 years. Cliff is survived by his wife Gail St. Louis, daughter, Renee St. Louis, Sister, Betty Barker (Raoul), his grandchildren, Lauren St. Louis and Jacques St. Louis, daughter in law Melissa St. Louis-Curry (Bob), stepdaughter Betsy L. Mularkey ((Mike), stepson Philip Conant (JoAnne) and many nieces, nephews and extended family. Cliff was predeceased by his parents Ernest and Marie (LaRouque) St. Louis, his wife Janet Wade St. Louis, his son Clifford Gerald St. Louis Jr. and his sister Janette McGregor. The family will receive friends in the Hamlin & Hilbish Chapel on Friday, Sept. 20th from 4 until 6 PM. Funeral Mass will be celebrated in St. Mary of the Lakes Catholic Church of Eustis at 9:30 AM on Saturday, September 21st, interment will follow in Greenwood Cemetery, Eustis. Please send memorials to the charity of your choice.

The family of Clifford Gerald St. Louis Sr. created this Life Tributes page to make it easy to share your memories.