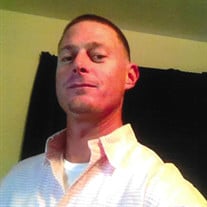 Christopher Doyle Prescott of Eustis, Florida entered God’s kingdom Saturday August 21, 2021, at the age of 42. Chris also known as Prescott was born on December 21, 1978, in Naples, Florida to his parents Doyle and Mary Prescott. Chris graduated from Barron Collier High School in 1997 where he spent his time wrestling, playing baseball, ran cross country and football. He was a class clown during high school and wanted to make everyone laugh. In his free time, he loved the beach, jumping on a boat to go wakeboarding, or challenging anyone to a tennis match. He also enjoyed playing the drums at church. In 2013, Christopher relocated to Eustis, Florida. One of his true passions also was his job being a custom carpenter. He took much pride and truly loved his work for Ushko Construction INC. Christopher is preceded in death by his grandfather Ray Theilen; Jerry and Joy Robert; Mike Theilen; and his uncle Donald Brown. Christopher is remembered, missed, and dearly loved by his fiancée, Christine Larcher; daughters Trinity and Corey Prescott; mother and father Theresa and Doyle Prescott; brother Duane Prescott (and family), Mike Prescott (and family); as well as so many extended family members and friends. There will be a gathering on Thursday August 26, 2021, at 12:00 pm located in the chapel at Steverson, Hamlin, & Hilbish Funerals and Cremations in Tavares, Florida. A funeral ceremony will be directly after the gathering at 2:00 pm in the Steverson, Hamlin, & Hilbish Chapel.

The family of Christopher Doyle Prescott created this Life Tributes page to make it easy to share your memories.

Send flowers to the Prescott family.