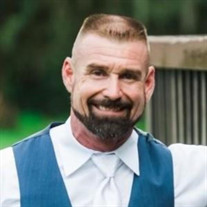 To rewatch the service, click the link below: https://webcast.funeralvue.com/events/viewer/57289 Brian Kelly DeGaglia passed away on Saturday, July 17, 2021 at the age of 44. He was born in Eustis where he continued to call home. Brian proudly served his country in the US Army. He was a local business owner of Brian DeGaglia Construction for many years creating and adding value to various properties in and around this community. When Brian was not out working in the field or on his business, you’d probably find him in the gym where his hard work and dedication shined brightest. Brian’s efforts led him to winning his pro-card and becoming a professional body builder in 2019. Brian was also a faithful follower of Christ. He was a vital member to his local church community, where he served as a youth pastor for multiple years. He also enjoyed traveling, trying new foods, and taking his loved ones on cruises. Brian loved his family more than any words could be begin to capture, and enjoyed spending endless time with them, especially his grandchildren. He was preceded in death by his brother, Roman DeGaglia in 1999. Brian is remembered and will be dearly missed by his wife of 27 years, Doris; mother, Ruth DeGaglia of Eustis and father, Martin DeGaglia of Eustis; son and daughter-in-law, Tyler and Christina Zimmerman of Grand Island; daughter and son-in-law, Kayla and Randy Meacham of Eustis; daughters, Kristin DeGaglia and Ruth DeGaglia, both of Lady Lake; grandchildren, Braiden Kelly, Kenson and Finley; brother, Bobby DeGaglia of Eustis; sisters, Marti Rippy (Richard) of Eustis and Jennie Simmons (Jeff) of Nokomis, FL; many nieces and nephews; as well as his dog, Bella. Family and friends are invited for visitation on Thursday, July 22 from 6:00 – 8:00 PM in the funeral home chapel. A funeral ceremony will be held on Friday at 10:00 AM in the funeral home chapel. Condolences, memories and photos may be shared on the tribute wall.

To rewatch the service, click the link below: https://webcast.funeralvue.com/events/viewer/57289 Brian Kelly DeGaglia passed away on Saturday, July 17, 2021 at the age of 44. He was born in Eustis where he continued to call home. Brian proudly... View Obituary & Service Information

The family of Brian Kelly DeGaglia created this Life Tributes page to make it easy to share your memories.

To rewatch the service, click the link below: https://webcast.funeralvue.com/events/viewer/57289

Send flowers to the DeGaglia family.