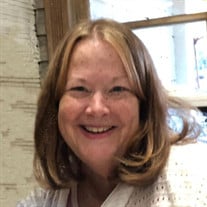 Amy McCain Hasselbring passed away unexpectedly in her sleep on Monday, October 12th at her home in Eustis, FL, where she and her family have lived since 1993. Joyous, warm, and loving, Amy was the devoted mother of Zoey Hasselbring of St. Louis, MO, Zach Hasselbring of Ringoes, NJ, and Eli Hasselbring, who is a senior at his parents’ alma mater, Principia College in Elsah, IL, where he’s continuing a four-generation tradition. Amy is also survived by her former husband, Mark Hasselbring of Newport, RI, sisters Priscilla McCain McFall (Pixie) of Timonium, MD, and Mary McCain Linick of Huntsville, AL, as well as several nieces and nephews: Camille Stewart and Alison Daly; Ryan, David, Colin, and James McFall; Matthew (Matt) Hasselbring; and Edward (Ted) and James (Jamie) Johnson. Survivors also include her former mother-in-law, Carole Hasselbring; former sister-in-law, Paula Hasselbring Johnson; and former brother-in-law,Steven Hasselbring. A lifelong Floridian, Amy was born in Miami in 1958. She was the second daughter of the late Kay McCain and Barbara Pennington McCain. Soon after her birth, Amy’s family moved to Jacksonville, and from the age of six, Amy grew up in St. Petersburg. She graduated from the Principia Upper School in St. Louis, MO, and then from Principia College with a B.A. in drama and elementary education. She later earned a master’s degree in Montessori education from Loyola University in Baltimore, MD. Amy spent most of her career working as a legal secretary in Miami and Orlando and then as a Florida Bar Registered Paralegal. From 2005 until her passing, she was with the law firm of Bowen|Schroth, in Eustis, FL. During her 15 years there working primarily for attorney Derek Schroth, she built a strong group of close friends and colleagues who loyally supported her during difficult times and joyously celebrated her many successful contributions. She also worked as a Montessori teacher in Mount Dora, FL, where she was known as "Miss Amy" and positively impacted the growth of her students in the LakeCounty community. Married and family life began in Miami. When the family moved to Eustis, they settled into a historic home which became the setting for countless gatherings of family and friends. Many who knew Amy were fortunate to be included in the “game nights” she enjoyed hosting. She was blessed by her friends, and they were equally blessed to know her. Everyone enjoyed her sense of humor and distinctive laugh. Amy was a lifelong Christian Scientist. The love for her faith was second only to her love for her children and inspired active service to her local church. There she had the joy of meeting her very dear and close friends Sylvia and Alan Naylor, of Ocala, David and Sue Coughtry, formerly of Mt. Dora, and their children Hannah, Jess, Tawney, and Hunter. Her other interests included porcelain painting, theater, dance, and international travel. She was a voracious reader, a deeply spiritual and intellectual human being, and in recent years she became an enthusiastic miniaturist—an interest she shared with her sisters. Amy’s family, friends, and colleagues will always cherish her memory and the privilege of being a part of her life. A memorial service will be held Friday, October 23 rd at 12pm at Hamlin and Hilbish, 326 East Orange Avenue, Eustis, FL For those who are unable to attend, please use the link provided below to view a live stream of this service: https://webcast.funeralvue.com/events/viewer/38885 In lieu of flowers, donations in support of the Eustis High School Band can be sent to the Music Association of Eustis, P.O. Box 1799, Eustis, FL 32727 or donations can be made through PayPal by selecting Music Association of Eustis in the Charities tab.

Amy McCain Hasselbring passed away unexpectedly in her sleep on Monday, October 12th at her home in Eustis, FL, where she and her family have lived since 1993. Joyous, warm, and loving, Amy was the devoted mother of Zoey Hasselbring of St. Louis,... View Obituary & Service Information

The family of Amy McCain Hasselbring created this Life Tributes page to make it easy to share your memories.

Amy McCain Hasselbring passed away unexpectedly in her sleep...

Send flowers to the Hasselbring family.