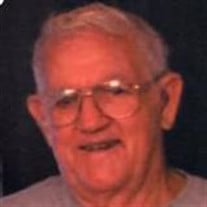 Allen Thomas Long (“Al”), 98, passed away Friday, November 29, 2019, peacefully at his home in Tavares, FL. Al was born in Woodsboro, MD, on June 30, 1921, to Lester W. Long and Verdie B. Long (Jackson). Al was drafted into the Army during WWII. He served in the 69th Infantry Division and participated in the Battle of the Bulge. For many years after the war, Al attended reunions of the 69th Infantry Division. The last reunion he attended was in September 26-29, 2019, in Philadelphia, PA. After leaving the Army, Al worked at Moore Business Forms in Thurmont, MD, where he met and married the love of his life, Catherine Louise Seiss (“Cassie”) on December 11, 1953. In December 1957, Al, Cassie, and their infant son, Dennis, moved to central Florida. Al worked at The Orlando Sentinel as an offset press operator, photo engraver, foreman, and manager. Al was the first manager of the Florida magazine, a full-color insert that appeared for many years in the Sunday edition of The Orlando Sentinel. In July 1985, Al retired after 28 years at The Orlando Sentinel. During retirement, Al purchased an RV and realized his life-long dream of traveling throughout the United States. Al and Cassie visited over 40 states before settling down in Mount Dora. Al’s beloved wife Cassie passed away on September 26, 2010. Al and Cassie were happily married for 56 years. In May 2013, Al moved to the Tiki Village Mobile Home Park, Tavares, FL, where he made many new friends and lived happily until his death. Al was preceded in death by his parents Lester and Verdie Long, Woodsboro MD; his brother, Herman Long, Frederick, MD; and his wife, Cassie Long (Seiss). Al is survived by his son, Dennis (Anna) Long, Monett, MO; two granddaughters Deanna (Dane) Wortley, Harrison, AR, and Amanda (Chad) Freeland, Conover, NC; three great-grandsons, Brandon Wortley, Vincent Freeland, and Jaxon Freeland; and many extended Seiss family members whom Al loved dearly. A memorial service will be held at 2:15 p.m. Saturday, January 4, 2020, at the clubhouse of the Tiki Village Mobile Home Park, 1300 Dead River Road, Tavares, FL 32778. Friends and family are invited to share a memory of Al at the website of Hamlin & Hilbish Funeral Directors (https://www.hamlinhilbish.com/). In lieu of flowers, the family requests donations to the American Lung Association (https://www.lung.org/get-involved/ways-to-give/).

The family of Allen Thomas Long created this Life Tributes page to make it easy to share your memories.

Send flowers to the Long family.